The $1.3tn US market for high-yield corporate bonds (also called “junk bonds”) has taken a ride on the roller coaster over the last few months. Bond prices have been decreasing sharply since the summer of 2015 with a couple of false recovery signals both in August and October of the same year. Indeed, the US junk bond market is largely composed of “energy bonds”, that is, notes issued by firms operating in the energy sector, which are negatively affected by the plunge in oil prices started in the summer of 2014. Moreover, high volatility in equities has reduced the risk appetite of investors, and between December 2015 and January 2016, the primary market has seen no sales of high-yield bonds for a record of 24 days, the longest period of inactivity after the financial crisis. However, the situation is not peculiar to the American market but it is widespread: for instance, overall sales in the European primary market were down 80% in the first quarter of 2016 with respect to the same period of 2015. The limited supply came from well-known issuers, those with the highest ratings among the speculative-grade sellers, manly driven by acquisition and spin-off related financings. By contrast, CCC issuers and energy sector companies were inactive because of the record high probabilities of default attached to them by the market, given the economic cycle. Yields on bonds of these firms reached a peak above 20% at the beginning of February 2016. 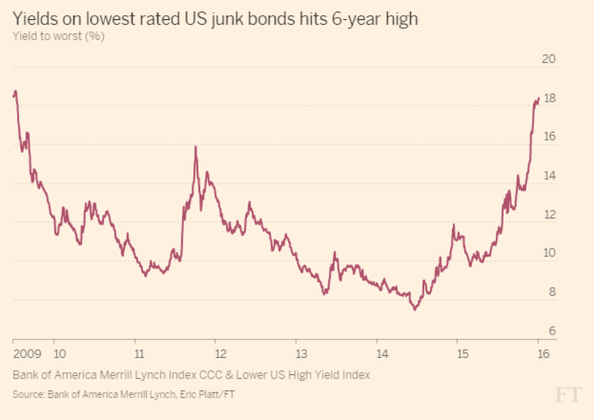 ​The context seemed to be changing in mid-February when many asset managers sensed attractive buying opportunities since prices were at record lows after months of major sell-offs. Fears of China slowdown were already priced in and there was less talk about US recession. Moreover, the overall macroeconomic background appeared more supportive due to a steady rally of the oil price and to dovish monetary policies by both the Fed and the ECB. Indeed, since the end of February, investors started pouring money into high-yield bond funds, which, at the end of March, had recorded the largest 4 weeks of inflows since 2012. As a consequence, also the primary market experienced large volumes in March, significantly driven by the $3.35bn sale of junk-rated unsecured notes by Western Digital as a part of its financing package for the acquisition of SanDisk, representing the second largest US high-yield bond issue on record. 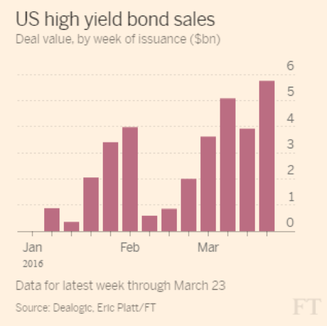 ​Given the recovery of oil prices, investors renewed their appetite for junk energy bonds, whose market was muted in 2016 until the offering by Anadarko Petroleoum, an American independent oil producer, occurred in mid-March. Furthermore, Dell is expected to tap the market soon with a huge sale of $8bn high-yield bonds in order to finance its takeover of EMC.

Nevertheless, the recent improved confidence in junk bonds is questionable. The doubt is whether this is a real turning point for this market or is another misleading signal. The answer, as always, is in fundamentals. As anticipated, worries of recession have vanished and analysts are now expecting a positive growth for US GDP in the first quarter of 2016, whose data will be released in the end of April. Moreover, April is Q1 earnings’ season and the outcome will affect equities’ performance, with a cascade effect on the risk appetite of investors. However, while US stocks have rebounded strongly after a grim start of the year, profits’ forecasts on the aggregate S&P500 show an opposite trend, expected to have fallen by 7.6% in Q1 with respect to the same period of 2015. This would be the third decrease in corporate earnings in a row, the longest period since the financial crisis. Clearly, the energy sector is expected to be the one hit the hardest, with forecasts below -100%. 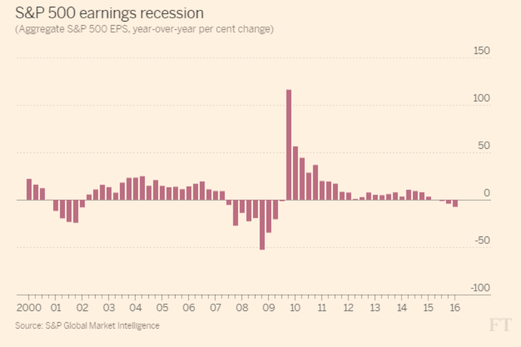 Lower profits would make the junk bond market more risky in a period in which risk aversion is quite high. Indeed, even if the Western Digital deal set a record offering, the size of the issue had to be reduced in order to meet demand. Even more significant, bankers had to focus the majority of the debt sale on the investment-grade part of the financing package, since investors shun the riskiest portion. Moreover, Standard & Poor’s has recently revealed that global corporate bonds’ default rate is at the highest level since 2009, and that for the vast majority American firms are involved. However, it is important to notice that without considering the mining and energy sector the rate is the lowest in the post-crisis period. Yet, interviewed by Fitch in April, almost all investors believed that the credit cycle has turned, and over 80% expected the default rate on speculative-grade issuers to climb at least up to 5% for 2016 from the current 3%. 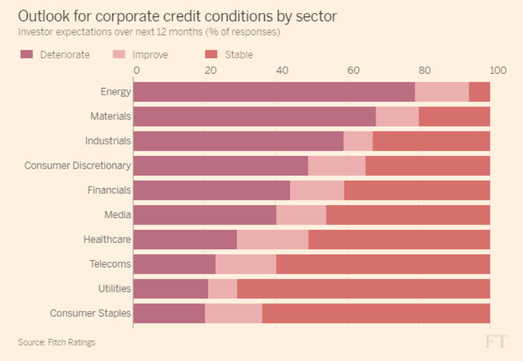 The macroeconomic environment is still challenging and geopolitical uncertainty is not helping. Anemic demand, deflation problems and slow growth are accompanied by Brexit fears, the Isis threat and a forthcoming unpredictable US presidential election. Central banks are giving a boost but the role of the oil price will be paramount. If supply glut is not fixed, there will be no support for a further increase in prices. Overall, the future of the US junk bond market is rather uncertain.