US-China​: has something been broken?

On January 3rd, the US Government blocked the acquisition of Moneygram, a money transfer company based in the United States, by Ant financial, Alibaba's arm operating in the digital payments sector; Alibaba had put $880 million dollars in cash on the plate about a year ago, then raised to $1.2 billion, in the effort to buy the US firm. The news has surprised the market generating a drop in Moneygram shares value as much as 10 per cent in after-hours trading.

However, this has not been the first time that Chinese investors have been interested in US firms and their deal has been blocked by American authorities. In September 2017, a Chinese-backed private equity firm planning $1.3 billion acquisition of Lattice Semiconductor Corp, U.S.-based chipmaker, was blocked by CFIUS, the Committee on Foreign Investment in the United States.
It was claimed that both these deals were blocked for security implications. But, now investors legitimately start to be dubious about the relationship between these two countries that has flourished in recent years. Is the political and economic environment between China and US deteriorating? Is President Trump’s new “America First” policy fault? Let’s investigate the reasons behind and the future developments of this vicissitude.
​
To understand the economic scenario, let’s analyse the total amount of Chinese investments (deals of >=$100M) in US firms in the last 10 years. 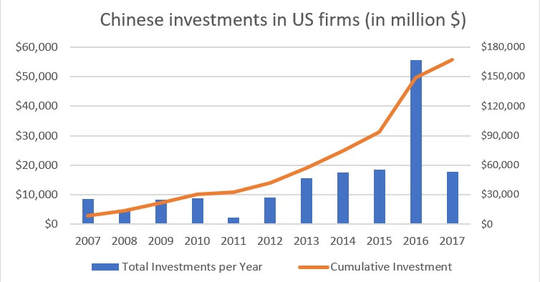 Data Source: The American Enterprise Institute and The Heritage Foundation (2017)
As we can see from the graph above, in the last few years there has been an increment in Chinese investments in US that have reached a peak of around $56B in 2016 and a total of around $169B in the last 10 years.
The reasons behind the recent increase and the boom of 2016 are mainly two. First of all, markets have worried about weakening of Chinese Yuan. Indeed, Raymond Yeung, China economist at ANZ, affirmed that: “These expectations for depreciation basically prompt investors to send money abroad in order to chase a higher yield and protect the currency value”. The second factor that must be considered is the Chinese transaction from a manufacturing economy to one based on technological and service sectors. Shaun Rein, founder of China Market Research Group, believed that: “They’re looking to diversify their revenue streams. […] The reason why they are going abroad is they are looking to buy technology, brands and management know-how”.
However, this trend has suddenly slowed down in 2017. A first driver of this contraction could have been the introduction of tightening controls on Chinese companies investing overseas by China’s State Council. The official motivation of this stricter supervision policy was to ensure "the safe operation of overseas assets and to increase the value of assets", but international analysts commented the operation as a measure to stop capital flight abroad. Moreover, President Trump election could have worried Chinese investors about the business condition in US. In fact, in his campaign, President Trump has accused China of currency manipulation and threatened to put additional tariffs on exports from this country. “The deeper we get into this administration, the clearer it appears that scepticism about Chinese deals has sharply increased," said recently John Reynolds, a partner at Davis Polk in Washington, in an interview at Financial Times.
China's government has criticized the United States for using "so-called national security" as a reason to block a Chinese billionaire's acquisitions while President Trump has not commented the decision. In this scenario, the tension generated by these last rejected deals has worsened the forecasts for future collaboration between these countries. Not good news especially for United State since China holds $1.2 trillion of its debt (more than any other country).

Nowadays, the relationship between China and the US is a question mark if not a threat in the international environment. Something has been broken in these two superpowers reciprocal relation but there is still time to find a solution. If these issues will not be solved, there is a serious risk to go back to protectionism, a situation that everyone in the market would avoid.
Matteo Zocca