ZTE Corporation is one of the biggest Asian multinational telecommunications equipment and systems public companies. The company is based on Shenzhen, China, and it is divided in three business units: carrier networks (54%), terminals (29%) and telecommunication (17%). ZTE was founded in 1985 and last year had revenues for over $17 billion and operating income of $1 billion. The firm has 74.773 employees and its stock is traded in two different stock exchanges, as to its first IPO on the Shenzhen stock exchange in 1997 followed a second one in Hong Kong in December 2004 to let international players invest in its shares.

According to the ban imposed on ZTE, the US government stopped ZTE’s purchase of any type of item from the US. American companies are estimated to provide around 25-30% of the components used in ZTE’s equipment. Following this seven-year ban from the Bureau of Industry and Security (BIS), the MSCI China Technology Index lost 0.8%, showing how worried investors are about Chinese companies that are doing business in the US. Chinese mutual fund managers cut the value of the stocks in their portfolio by an average 25%, but the most pessimistic such as JT Asset Management dropped the valuation to over 30%.

The ban has been caused by ZTE’s violation of an agreement that prevented companies from shipping US goods to countries subject to international sanctions. This penalty follows a sanction of $1.19 billion that ZTE already paid in March 2017 for having illegally shipped equipment to Iran and North Korea against US regulations. After protesting the ban, the Chinese company said it has learnt from its past mistakes on export control compliance. The company then responded to the ban in a press release defending itself by saying that it is working with the US Department of Commerce to solve the issue. This sanction happens in an historical period where Donald Trump already spread into the tech sector his trade war with China, and the action is likely to aggravate current tensions between Washington and Beijing.
​
If on the one hand the sanction could threaten ZTE’s business of selling smartphones that use Google’s Android system or companies that incorporates US chips, on the other hand it could even affect revenue flows to US companies, such as Qualcomm, which supplies relevant technologies to ZTE. The biggest issue for the Chinese company is represented by the fact that Google OS market share is almost three quarters of the global mobile market, with the rest being dominated by Apple’s iOS, which is another US company. 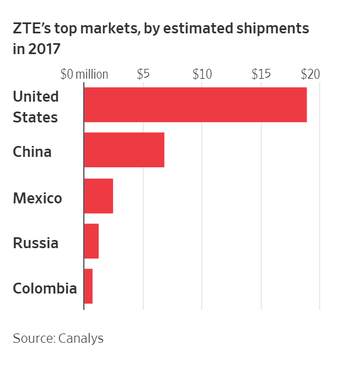 It might be possible to forecast the outcomes of this technology trade war, with both countries affected. According to Reuters, although roughly a quarter of components in ZTE devices comes from Qualcomm, the company could possibly survive by using Taiwan-based SoCs in its products. ZTE could have very few options with respect to operating systems instead, since operating systems outside iOS and Android have less than the 1.5% of global mobile market share. The impact over US companies such as Google might instead be minimal, since ZTE is not one of the major players for the Android world. However, even if ZTE is not the major overseas partner for Google, the Silicon Valley giant is relying on many Chinese companies selling smartphones in their home country to be able to distribute its apps to less-affluent users. Moreover, since Google does not charge anything for its operating system, it is extremely important to reach millions of Asian mobile users to earn money from ads and collecting valuable data.

According to Morgan Stanley, about 30% of Alphabet’s revenue comes from the mobile business, and the two main sources for this division are represented by mobile-search ads and sales of apps in the Google Play Store. ZTE is surprising the fourth seller of mobile devices in the US, and it doubled its market share of the US market reaching a peak of 11.2% according to Canalys. For these reasons, ZTE denoted that the ban could cause serious and deep damages to a large number of US companies as well. “Google could have hard time returning to the company. Google has always wanted to come back to the Chinese market”, Shanghai-based research analyst at Canalys Mo Jia said. “If the trade war continues, both the Chinese technology companies and the American technology companies are at risk.”

Despite problems ZTE could face in the first period, this ban might also result as an incredible opportunity for China to catch up with US tech industry. According to some analysts, the trade war could be the best way to achieve a breakthrough in technology. US could have potentially kicked-off Chinese companies in a field where Chinese players are at least 10 years behind the West. Even Alibaba’s founder Jack Ma said it is the right moment to use the ban as a chance to reduce China’s dependence on core foreign technologies.

In 2015, Chinese government set the goal for the industry to rely only on domestic sourcing for at least 70% of core components by 2025. China is also targeting to become the first global power in Artificial Intelligence by 2030. Beijing’s industrial plan “Made in China 2025”, created to dominate high-tech industries, has already been criticized by the Trump administration: “It is a plan created to give China’s tech companies unfair advantages over foreign rivals”. Eventually, the US-China tech trade war has just started.