Varo Money has become the first fintech start-up to receive a US federal banking charter. What does this mean for the banking sector?

US depository institutions have officially a new adversary to go up against: fintech companies. While the competition with such companies in the payments business has been going on for quite some time, just few weeks ago they reached a significant breakthrough in deposits: Varo Money, a Silicon Valley start-up has become the first to receive a national banking charter on July 31st, and afterwards has started accepting federally insured deposits. This is a major breakthrough, a feat that has been sought after for long by the firm, and opened the way for a level playing field in which fintech start-ups can take on the behemoths of the US financial system. Multiple start-ups have already been receiving customer deposits in the past, but this mostly was done by using a scheme involving a community bank, which would ask for a fee (this has also been behind the success of other fintech companies such as Robinhood, Square and Stripe). The process that Varo followed did not come at cheap, with an estimated expense of $100 million.
Varo is one of the biggest player in the US fintech banking landscapes, alongside firms like Chime and Current. It offers three types of accounts, all of which without any monthly fee, including a cash account that permits quick money transfers and is exempt from most of the other fees charged by traditional banking institutions, and a savings account that delivers up to a 2.8% annual percentage yield. As these deposits are insured up to $250000 by the FDIC, they are really attractive as the promised rates are substantially above the one offered by the traditional institution and even medium term US government bonds. The firm is also going to launch “Varo Advance”, a program that lets its clients borrow up to $100 at a relatively low fee to cover any unexpected expense coming up before they receive their pay check. Varo’s CEO Colin Walsh said that the license would allow the company to get into new businesses, including lending, while keeping a substantially leaner cost structure with respect to traditional institutions, without the expenses necessary to maintain a branch and ATM network. 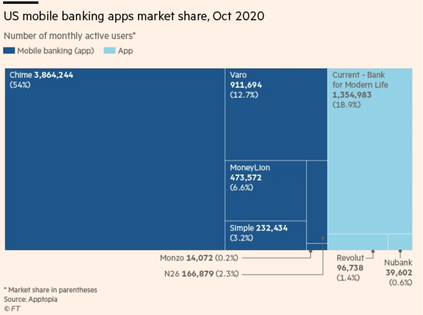 Fintech start-ups do not have any special regulatory treatments with respect to the incumbent banks. The Office of the Comptroller of the Currency (OCC), the primary federal regulator for national banks and the entity that is in charge of issuing the national banking charters, has set up in the last years a path for fintech companies to operate as depository and lending institutions while falling under the same requirements of stability, transparency and customer fairness that are applied to traditional players. The Federal Deposit Insurance Corporation (FDIC) is also part of the process for receiving a national banking charter, as its approval is needed in order for the deposits of the bank’s clients to be guaranteed. This approval is often the biggest mountain to climb to get the charter, as the FDIC is viewed as more conservative than the OCC and its chair has often asked for caution in introducing fintech firms into the banking environment. The toughness towards fintech companies is also meant to be a deterrent for big tech companies, such as Amazon and Google, looking to expand into the financial sector, in a fashion similar to China’s Alibaba and WeChat. The tough response to Facebook’s initiative to set up Libra, a cryptocurrency to be used within its platforms and also other major applications such as Uber, is to be taken as an example. The huge data infrastructure built across the businesses of this giants could lead to a major disruption for the financial sector, but also anti-trust concerns.
Another potential threat to depository institutions is generated by robo-advising firms such as Wealthfront, that is currently offering a 0.35% annual percentage yield on its cash accounts, declared as 8 times what is granted by traditional institutions, and provides personalized investment management through its proprietary technology at a fee of only 0.25% per annum. However, the assets under management of the five largest robo-advisors (lead by Vanguard Personal Advisor Services) only account for around $260 Bn, far from the trillions of dollars on the balance sheets of banks.
During the pandemic, the downloads of mobile banking applications has gone through the roof, with almost 60% of Americans downloading a app to manage their money. However, data does not suggest a significant transition from deposits at the traditional institutions to fintech companies, as the largest traditional depository institutions have had consistent increases in deposits over the last five years. 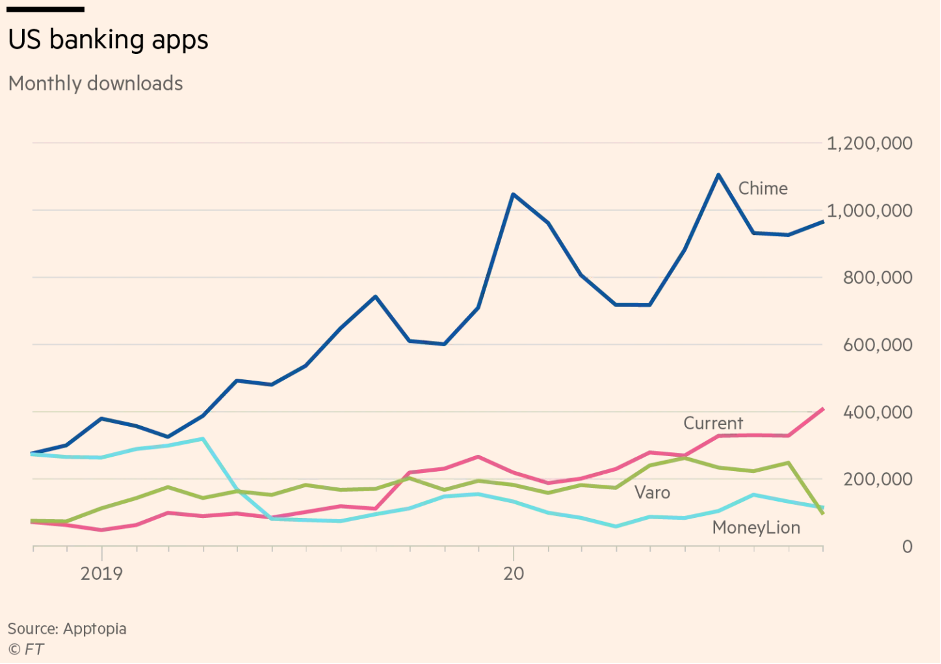 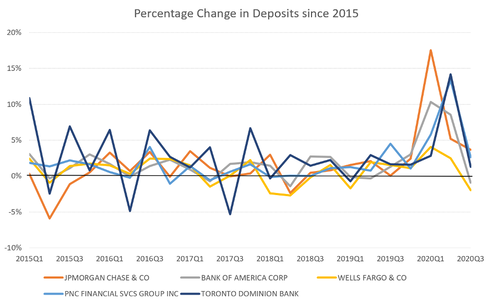 Source: Compustat
The differences in the cost structure of fintech start-ups like Varo Money and traditional banks could potentially lead to a future situation in which such start-ups are able both to promise a higher yield on deposits (which is already happening) and offer cheaper loans, disrupting an industry that has been suffering for almost a decade due to the low interest rate environment. However, this may not be as bad as it seems: US banks have achieved record profits in 2020, mostly due to investment banking and asset management practices, even when accounting for substantial bookings for loan losses. Lastly, US banks themselves have been closely paying attention to the fintech space, funding consortiums and acquiring potential threats, thus they will be ready to take on the challenge or buy it out.