​On February the 19th of 2018, Vista Oil & Gas announced the purchase of a 99.7% share in Petrolera Entre Lomas (Pelsa), for $700m. The closing is expected by the end of March, as the transaction will be officially approved in the next shareholders’ meeting.
According to Mr. Galuccio - Chairman and CEO of Vista - “With this transaction, we found the right balance of current profitable production and reserves coupled with high-growth potential in Vaca Muerta, the most exciting emerging shale play globally – perfectly aligned with our vision. The platform and timing could not be better suited to start delivering on our plan of becoming the leading Latin American independent oil and gas company.”

About the industry
The last 3 years have been very rough for the oil and gas industry, driven by a slump in prices, weak demand and lack of investor confidence. However, according to analysts at RBC Capital Markets, the cycle is moving to its upward part as the supply cut is reducing the global inventories, pushing prices up.
On February the 19th the Brent Crude Oil price was $65 per barrel, up by about 18% since the same month of last year. According to the U.S. Energy Information Administration, the average crude oil price will be $60/b in 2018, $61/b in 2019 and $85.7 in 2025. 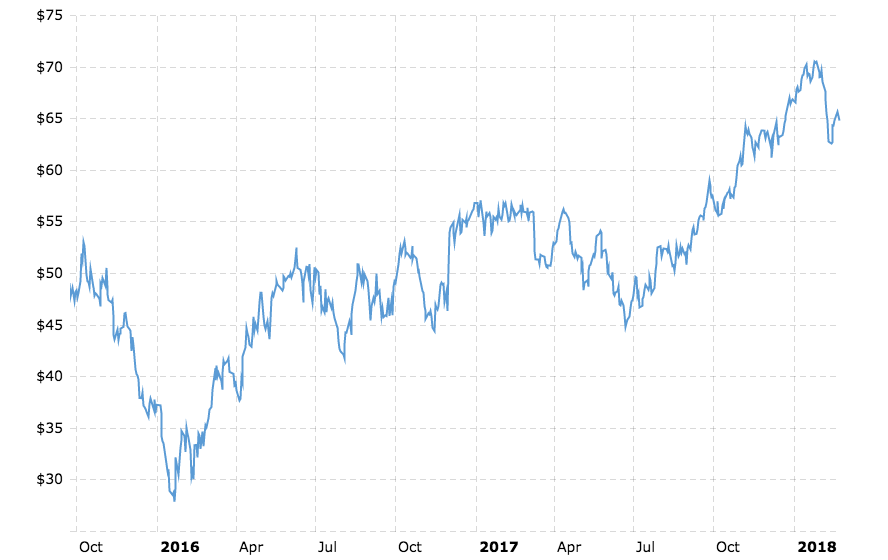 Brent Crude Price
​An increase in prices is a relief for investors because the oil business is characterised by low margins: if firms are not efficient in cutting costs and prices are low, they cannot be profitable. Consequently, economies of scale and cost synergies are essential.
On the other hand, the demand is very price sensitive because alternative energy sources are becoming cheaper and more attractive. In particular, renewable resources represents a major threat given the environmental implications of hydrocarbons and the rising popularity of electric cars.
About Vista Oil & Gas
It is a Special Purpose Acquisition Company (SPAC), listed in Mexico since August 2017. It is backed by the private equity firm Riverstone. The current market cap of Vista Oil&Gas is $650 million, while its share price is $9.88.
The strategy of Vista Oil & Gas is to raise funds in order to make business combinations mainly in Columbia, Mexico, Argentina and Brazil. In these countries, there is indeed a favourable business environment driven by regulatory changes and market conditions. The company believes to improve the operational efficiency of the acquired firms, exploiting the technical expertise, operating and commercial experience and the solid industry networks possessed by the Management Team.

About Petrolera Entre Lomas
Petrolera Entre Lomas is a private company held by Pampa Energia and Pluspetrol. It produces and develops hydrocarbons in the Entre Lomas area in Argentina.
Pelsa owns proved reserves of 55.7 million barrels of oil equivalent and it produces an average of 27,472 barrels of oil equivalent per day. The company is expected to generate a pro-forma EBITDA of $182 million in 2017.

About the deal
After giving effect to the transaction, Vista will become the fifth largest oil producer and operator in Argentina and the only Mexican listed exploration and production company.
The transaction will be financed by the $650m IPO proceeds and by the $150m provided by additional shares acquired by Riverstone and other investors. Moreover, Vista has also entered into a credit facility of $300m for increasing the likelihood of closing the transaction.
According to the analysts’ expectations, upon closing, Vista’s enterprise value at $10.00 per share would be approximately $860 million, and an equity value of $960 million. Assuming the backstop credit facility described below is not drawn at closing of the transaction, Vista expects to be debt-free and have $100 million of cash on hand to fund future drilling and acquisitions.
Citigroup and Credit Suisse acted as capital markets advisors to Vista. Citigroup, Credit Suisse and Morgan Stanley served as private placement agents as well as provided the above-mentioned commitment for the backstop credit facility to Vista. Evercore acted as financial advisor to Vista.