On Tuesday December 22nd Vivendi chairman Vincent Bolloré announced that the French Group attained a 28.8% stake in Mediaset and it threatens to lift its stake even more, up to 30% of voting rights; the latter being the legal threshold above which a mandatory tender offer should be triggered thus requiring the acquirer to launch a takeover offer for all shares outstanding and buying them “depending on market conditions” (Takeover Directive 2004/25/EC).

Amid the unwelcome approach by Vivendi, Silvio Berlusconi, founder of Mediaset in the 1970s, is trying hard to retain control of the Italian media company. Indeed, Fininvest, the family holding, recently built up its ownership in Mediaset from 35% to 38.3% in response to Vivendi’s conduct. Fininvest actions, however, are restricted by the Italian law which prevents the company from quickly raising its stake by more than 5% each year without launching its own offer for all shares outstanding. Consequently, the family cannot purchase any more shares until April 2017 and can only raise its ownership stake another 2 percentage points (i.e. reaching 40%).

The companies have been arguing for months, both in courts and in public statements, over an €880 million share swap (April 2016) that would have given Vivendi the ownership of Mediaset’s Premium pay-tv channel and each company a stake in the other. The deal, however, fell apart a couple of months later (July 2016) after the French Company soured on the value of the pay-tv unit, with Mediaset shares consequently dropping significantly in value.

Since then Vivendi has been buying shares in Mediaset at a steady clip. In the second week of December, following the above-mentioned long-running legal disputes between the two giants, Vivendi spent €800 million to set up a 20% stake. Following this announcement Mediaset shares rose as much as 29 percent to €3.58 in Milan, the steepest increase since the company was listed on the stock exchange in 1996.

The fluctuations of Mediaset shares during the past couple of months are shown in the graph: 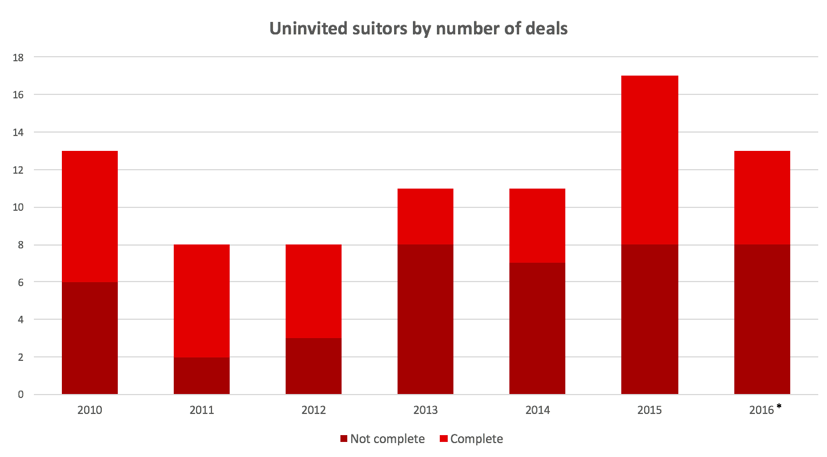 In a statement, Berlusconi’s Fininvest accused Vivendi of “intentionally manipulating the market and creating the conditions to artificially bring down the value of Mediaset in July 2016 and launch a discount purchase that looks like a real hostile takeover.” For this reason, Fininvest has now asked the Italian market regulator Consob to act in the dispute.

On the other hand, Vivendi replied by saying that “its stake in Mediaset is in line with the group’s intention to expand its activities in southern Europe and to promote its strategic ambitions as a major international, European-based media and content group.” In addition, the group also specified that Mediaset could not be notified prior to the purchases for legal reasons, hence even if the move was not solicited, it is not hostile.

It is certain that the dispute between these two enormous media companies is nothing but solved and will for sure have several implications on the Italian economy as a whole.