If $300,000 can afford a flamboyant Ferrari, they are certainly not enough to purchase a single share in Warren Buffett’s Berkshire Hathaway, which is currently trading at $325,000. While it is certainly a surprising figure, this seemingly absurd quote is justified by an outstanding performance over the years and by the absence of share buybacks in the whole fund’s history.

"I don't want anybody buying Berkshire thinking that they can make a lot of money fast. They're not going to do it, in the first place.” That is how Buffett explains this choice. Still, Berkshire, whose overall stock portfolio was valued at $207bn at the end of September, is up 10 per cent from last year and is currently the 5th largest company in terms of market cap, preceded by Alphabet, Microsoft, Amazon and Apple.

The stock price is not the only peculiarity of Berkshire. For instance, Mr. Buffett is known for its unique investment strategy of directing funds only to companies that he fully understands. And banking is certainly an industry that the Nebraskan billionaire knows well.

On November the 14th, Berkshire disclosed in a regulatory filing that it had purchased 35.7m shares of JP Morgan for $4bn, equivalent to 1.1 per cent of the bank’s outstanding shares. Buffett has even invested in the bank via his personal portfolio. Shares jumped 1.5 per cent on the announcement and currently stand at around $100, not far from last year’s quote, after a major fall in September. This new stake adds to Buffett’s current holdings in banks, including Bank of America, Wells Fargo and American Express. Indeed, the investment brings the number of major financial institutions held by Berkshire to 14, in a diversified $94bn portfolio ranging from regional institutions to undisputed leaders like Goldman Sachs (recently relieved by Buffett after the 1MBD scandal).

The investment in JP Morgan consolidates the relations between the two companies. Mr. Buffett is in very good terms with the CEO Jamie Dimon and the pair recently led a group of almost 200 chief executives arguing that the nature of US quarterly earnings reporting was harming the economy by encouraging short-termism. Furthermore, Amazon, JP Morgan Chase and Berkshire Hathaway started a joint venture in June to tackle the issue of US workforce healthcare, with the aim of cutting costs for their more than 1m employees using technology and the “scale and complementary expertise” of its three backers. The investment will certainly strengthen this partnership.

​The timing of the investment might raise some concerns. Five years ago, JP Morgan stock was half the price. Now, on a price/book basis, it is more expensive than that of any other large US bank. How could the Sage of Omaha miss such an opportunity? While JPMorgan handled the 2008 crisis better than its peers, its complexity and its heavy use of derivatives prevented investments from Berkshire in the past (Buffett is known for criticizing derivatives as “financial weapons of mass destruction”).

Now the situation is different. Regulation pushed the industry to reduce riskier trading and to expand in simpler consumer banking. Jamie Dimon’s attempts to simplify the bank were successful and his governance is strong. Profits are up, partly thanks to Republican tax cuts. For instance, JP Morgan can pride itself of a $30bn net income, which makes it one of the top earners in the world (surpassed by just a few companies, including Berkshire) and projections for the future are positive. 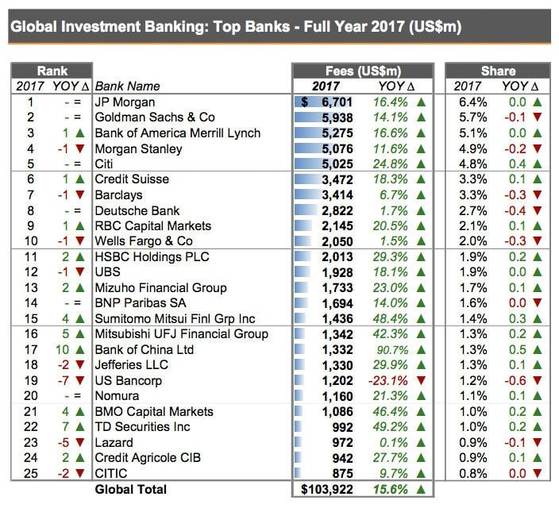 Berkshire bought back almost $1bn shares in November, a move which underlines difficulties in finding new appealing investments. Markets are experiencing a rough time and uncertainties about next year could be a signal of an incoming deal drought. JP Morgan is a profitable, established institution, focused on long run performance. From this perspective, Buffett’s trade makes sense. Only returns will prove him right or wrong.