What is behind Samsung’s $8 Billion offer for Harman International Industries Inc.?

Samsung has always been more inclined towards doing its own research, rather than acquiring companies to gain new technology. One of the main reasons for this decision was due to the result of its largest previous acquisition in the 90’s, a deal to buy AST, a California based computer maker, for $840 million. The company was forced to close the division shortly after purchasing it because it was incurring a string of losses and a mass defection of research talent.

Samsung is facing pressure from both investors and politicians for hoarding its cash, which by the end of 2015 amounted to $60 billion. Thus, the Korean government is promoting a plan to impose a 10 percent tax on excessive reserves in order to encourage Samsung and other companies to stop hoarding money. The management of Samsung is inclined to invest. “In our view, this suggests that the company is looking to components—a segment that needs massive capital spending—to drive its future growth,” KDB Daewoo Securities analysts Will Cho, Wonjae Park, and Jonathan Hwang wrote in a report. “We believe the company will reorient growth away from devices and into components”.

Furthermore, Samsung’s smartphone unit has been under a lot of pressure due to the Galaxy Note 7 fiasco. In order to diversify its revenues, the company is considering to move in the automotive electronics market and join a growing list of global technology companies moving into automobiles, such as Google and Apple. The companies see the car industry as not yet remade by software and online technologies, so this deal will also allow it to compete more evenly with its rivals inside the car. The market for automotive electronics is projected to grow to over $150 billion by 2025, according to Samsung. 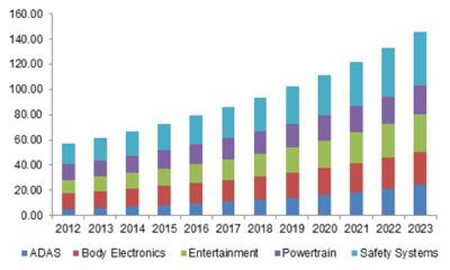 Samsung Electronics and Harman International Industries announced on 14th of November that they have entered into a definitive agreement under which Samsung will acquire HARMAN, the market leader in connected car solutions, for $112.00 per share in cash, or total equity value of approximately $8.0 billion. This will be Samsung’s largest all-cash acquisition, placing itself at the heart of the car-tech market. The transaction is expected to close by mid-2017, at which time Harman will become a standalone subsidiary of Samsung.

By acquiring Harman, Samsung will be able to gain a solid start in the automotive component business, as Harman is a Tier 1 supplier with deep relationships and a wide range of customers. Its component business is expected to grow from the transaction, since connected cars are likely to increase demand for displays, memory and microprocessors. Samsung would, on the other hand, create significant growth opportunities for Harman’s auto-parts business with its expertise in consumer electronics. The acquisition will also deliver significant value to Harman’s shareholders and to Samsung’s and Harman’s customers by providing new offerings and elevating user experiences.

This transaction will bring Harman and Samsung’s complementary strengths together to accelerate innovation in this space. “Harman perfectly complements Samsung in terms of technologies, products and solutions, and joining forces is a natural extension of the automotive strategy we have been pursuing for some time,” Vice Chairman of Samsung Kwon Oh-hyun said in the statement.