What is going on within the semiconductors market ? An overview of the industry and its main logics​

Semiconductors have been an increasingly important part of the modern ICT Movement since their invention. They are a clear example of a General-Purpose Technology (GPT), a technology with a wide variety of applications. These components are the building blocks of intermediate products, including integrated circuits (chips), diodes, and memories, which are now needed in the production of electronic devices of all types and applications, including automotive, IoT, telecommunications, and military equipment. Given the wide range of applications for semiconductors, it is not surprising that the global semiconductor market has steadily increased in size until 2019. Forecasts issued prior to the COVID-19 crisis, in particular, predicted that the industry's total sales would reach half a trillion dollars, continuing a steadily rising trend. (Fig. 1) 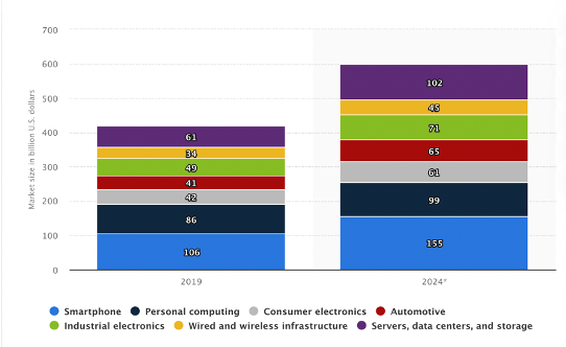 Fig 1 , Source: Statista
Semiconductor sales are concentrated in the world's major industrialized and developing regions (Fig. 2): North America, South East Asia, Europe, Japan, and China. The latter is the world's largest single-country market, accounting for roughly one-third of global demand. In terms of production capacity, however, the situation is quite the opposite. Today, the US accounts for 45 percent of total output, followed by South Korea (24%), Japan (9%), Europe and Taiwan (respectively 9% and 6%). Despite its voracious appetite, China is far from self-sufficient, producing only a minor percentage of total semiconductor output worldwide; the country can barely meet the 15% of its internal demand. As a matter of fact, in 2014, the Chinese government issued a "National Integrated Circuits Plan" aimed at accelerating technology transfer. This has been accompanied by aggressive practices of acquiring foreign human capital at non-market prices – as well as an open violation of intellectual property rights. The overall goal is to bring China's semiconductor production up to speed with the leading competitors and to have Chinese-made chips available to meet at least two-thirds of domestic demand – an ambitious target if compared to the current situation. 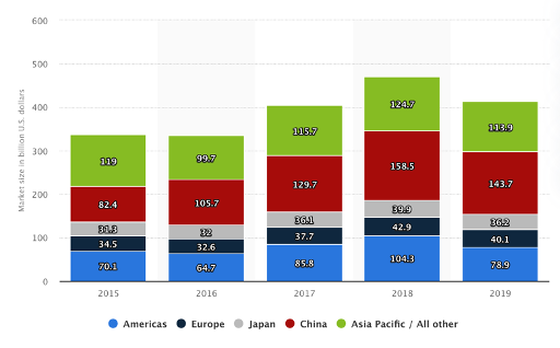 Fig. 2, Source: Statista
The high economic returns and the strategic importance that this sector offers are, however, counterbalanced by a high level of technological sophistication necessary for the production of its products, especially in military or high-tech fields (e.g., 5G breakthrough communication revolution) where the production of nanometric components is necessary. Because of semiconductors' strategic importance, their availability is critical for any leading (or willing-to-be) economies. Semiconductors are the "brains" of every electronic device and are essential for the functioning of the modern military sector, as well as a key weapon in modern warfare. As a result, governments are primarily concerned with ensuring the supply of semiconductors for domestic use, which is heavily based on the presence of an efficient global value chain and therefore on countries openness to international trade and capital, human migration among countries.

These geopolitical implications become crucial when we go to frame the context in which the semiconductor value chain operates globally. At present, the production of semiconductors runs through five stages: R&D, Design, Manufacturing, Assembling and Distribution. The role of the geopolitical actors in the value chain of semiconductor is pivotal and varies significantly depending on the country.  United States is the biggest player in the first part of the global value chain, providing machine tools and software design companies. Manufacturing and assembling instead are located across a wide range of countries (with the Asian market, especially Taiwan, the leader in nanometric components – the most coveted).  It is critical to emphasize the semiconductor industry's reliance on its global and widely dispersed value chain, as it is vulnerable to geopolitical waves and thus very fragile during "slowbalisation" periods such as the one we are experiencing since the 2008 crisis. For example, the US, within the recent general strategy of damaging China in the high-tech industry, decided to block the export of semiconductors made in the US in China and has asked those procuring with American licenses to ask before exporting to China (SMIC restriction – December 2020). This led to a shortage in Chinese disposal of semiconductors, a deficit unacceptable for a country that is trying (mostly successfully) to gain the polarity of the geopolitical world order in the near future under the guise of an "open trade economy".

Why are we witnessing a shortage in semiconductors supply within the Automotive industry?

Recently, the supply of semiconductors in the automotive industry has been impacted heavily, causing production cutbacks in the sector: Ford, Toyota, Nissan, VW, and FCA are among the global carmakers that have scaled back output. NIO Inc. recently became the first high-profile Chinese carmaker to succumb to the semiconductors shortage and will temporarily halt its production at one of its factories in the Anhui province.

First of all, the drop in vehicle demand caused a suspension in semiconductors demands from the main automotive players globally. Once the market bounced back, the automotive producers placed massive orders for semiconductors which caused a bottleneck in supply. Secondly, geopolitical factors. The constant presence of bipolarity in global leadership, with a deep rift between China and the USA, has led to progressive destruction of the global value chain of semiconductors. This is particularly relevant in an industry such as that of semiconductors, where political and technological interests interface a global supply chain extremely dependent on expansionism and free-market policies. Lastly, unfortunate circumstances within the industry. Two fires in Japanese factories cut off supplies of semiconductors, which was further impacted by constraints in the global transportation system, which is experiencing higher demand due to global shipments of the Covid-19 vaccine.

All these elements combined make the semiconductor market unstable and place automotive manufacturers in an awkward position. With the advancement of electric cars, the industry is increasingly shifting the production towards electric devices, therefore dependent on the semiconductor market, which with its production must satisfy – and it is barely succeeding - a wide range of industries.

Food for thought on the semiconductor market

When dealing with semiconductors, it is fundamental to take into consideration geopolitical post-covid implications. Given the sector's strategic importance, it is very likely that the leading countries will apply policies to gain market share and act as a reference player in the market. These implications become even more dangerous if contextualized in a de-globalization wave like the one we are witnessing today, with high re-shoring rates and a growing loss of confidence in international trade. Will the semiconductor industry satisfy its demand, or the nationalist policies will further disrupt the industry value chain? Will leader countries change the global value chain into an entirely national value chain while maintaining the same degree of innovation? Crucial will be China's next move towards Taiwan and the US reaction to One Policy China. Will Biden thwart One China Policy or allow its biggest geopolitical rival to incorporate the leading country in manufacturing nanometric components?

Finally, this topic is only one of the many concerning the growing geopolitical frictions and the related impacts on industries. Considering these trends, shouldn’t financial markets be more attentive to the environment the companies are exposed to, shifting the traditional valuation methods of companies to a broader perspective?

​Want to keep up with our most recent articles? Subscribe to our weekly newsletter here.
​