What is going on with Tesla?

Tesla warned shareholders that the results of the first quarter would be disappointing. Either way, the grim reality unveiled on April 24th should shock investors.
On an adjusted basis, the electric car maker lost $ 2.90 a share in the quarter. Revenue of $ 4.5 billion from the fourth quarter tally fell 37 percent. After entering it with $ 3.7 billion, the company ended the quarter with $ 2.2 billion in cash, thanks in part to $920 million of convertible debt repayment. Tesla had reported a 31% slump in vehicle deliveries compared to the previous three months. The drop was due in part to delays in Model 3's first overseas shipments. But it also reflected the unexpected collapse in the deliveries of older S and X models, which fell to 12,100 — less than half of the number shipped to customers in the final quarter of 2018. Tesla faced a steady erosion of its profit margins this year, even without its logistics problems. The company cut its vehicle prices to compensate for the loss of a US tax credit to American customers, while also trying to make the Model 3 affordable to many more people. In the second quarter, Tesla said it expects to lose money again, despite its forecast that it will deliver significantly more cars than in the first three months of the year.
That is not what investors should want to see from a company telling stories of fantastic growth over the coming years. Yet Mr. Musk has been as audacious as ever, vowing at a conference that Tesla will launch its own car insurance operation in the coming month.

“Why Buy Tesla When You Can Buy a Tesla?”
Just to quote the interesting question asked by Charley Grant, a WSJ author. Elon Musk stated on Monday April 22nd at Tesla's investor day that the future launch of a self-driving Teslas on-demand robot taxi fleet will give the cars a net present value of around $200,000. Not a bad deal for speculators, as the cars start at about 20% of that amount. The CEO also promised that when they put their cars into commercial service, owners would be able to earn passive income. That compares quite favorably with Tesla's shares, which have not paid a dividend and lost almost 20 percent of their value this year.
Moreover, Mr. Musk gave a forecast for when Tesla would finally make sustained profits: only after this global network of fully self-driving robot taxis has been established. He has not lost his habit of steering investors toward the long run. The prediction came while the Tesla boss gave his far-reaching explanation of how he plans to turn the company into the operator of the world's first ride-hailing-service for driverless taxis, taking a 25-30 percent reduction in fares. In order to build a robot car service with enough vehicles to attract riders, Mr. Musk said the company expected to supply vehicles themselves to supplement private owners of Tesla at an estimated cost of $ 25,000 per car.
Last month, the company started shipping vehicles with computers that it said could handle full autonomous driving based on the first in-house AI chips it designed. By the end of this year, the technology enhancement would be completed by an over-the-air software update, and the company expected to make sure that the driverless system is safe by the middle of next year, Mr. Musk said. This would make it possible, if regulators agree, to launch a robot taxi service before the end of 2020. Tesla is going to bet that the data it collects from over 400,000 of its vehicles already on the road will give it an edge in training the AI, allowing it to beat rivals like Waymo and Uber to full self-driving technology.
Many of the biggest questions about this service, such as what regulators will need to approve them and insurers to cover them, went unanswered.

The necessity of raising new capital
The electric car maker reported two weeks ago that, in the wake of a Q1 loss that was much worse than expected by Wall Street analysts, it could issue new debt or equity financing. Elon Musk, on April 24th's earnings call, said "there’s merit to the idea of raising capital at this point"— a reversal from the previous insistence of the chief executive the firm did not need more money.
Most observers still agreed that a significant amount of money can be raised by Tesla. Even after its stock has declined, it remained above $ 40 billion in market capitalization, making it worth about the same as Ford Motor. The company had three options to raise new capital: issuing new shares, issuing new unsecured or secured bonds or doing a hybrid of debt and equity, the so-called convertible bonds.
As in the past, many believed that issuing convertible bonds could be the most appealing option for Tesla. Typically, such securities carry low interest rates. They also do not dilute shareholders immediately— although they may be able to do so in the future if shares rise to a predetermined threshold near maturity of the bonds. Many investors liked Tesla convertible bonds as they offer some of the debt safety with higher potential equity returns. There are also hedge funds specializing in buying convertible bonds while shortening or betting against the same companies' stock, another factor driving Tesla's convertible bonds demand.
Indeed, on Thursday May 2nd, the company completed a $2.35 billion stock and bond sale. Tesla was able to increase the size of its convertible bond offering by $ 250 million to $ 1.6 billion, meeting solid demand from investors. It also raised about $ 750 million from its sale of almost 3.1 million common shares at $ 243 each.
Tesla has a debt of $ 10.3 billion with $ 1.92 billion to be repaid this and next year.
Several analysts had called on Tesla to raise new money in the second half of last year, as momentum in the production rates of the company and car sales lifted the stock to about $376 a share in December 2018. The decline of the stock in recent months meant the company had to sell more shares to achieve its goal of gathering funds. 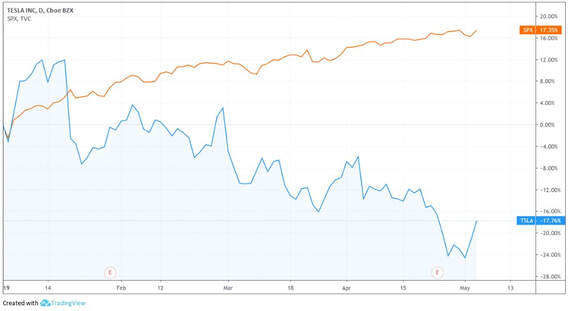 Tesla's shares (blue line), which were struggling this year, got a boost on Thursday, May 2nd, after the company revealed plans to raise fresh funding. Tesla’s 18% share-price decline this year contrasts with gains of about 17% for the S&P 500 index (orange line). Investors said they welcomed the fresh injection of capital as first-quarter results were unexpectedly poor, pressuring Tesla's shares.