What’s next for FCA

These day and age, several companies find themselves in need of making major decisions regarding their business in the light of the Black Swans of 2016. For FCA the biggest challenge in the near future is for sure provided by Sergio Marchionne stepping back from its CEO and Chairman role in 2018. While several stakeholders are wondering about FCA succession plan after its bold CEO’s mandate expires, there is still a fair amount of uncertainty about the company’s next moves.

Indeed, according to early April disclosures by Mr. Elkann, controlling shareholder of FCA, Italian mid-sized companies provide an attractive investment opportunity for the group. Specifically, he mentioned fast growing consumer goods companies such as the well-known Eataly, Technogym and Moncler, who stand for Italian excellence in different niche market segments. Even though Eataly is currently looking for another investor to pave its way to going public, it has been officially clarified that FCA is not going to be up for it. This is probably due to the 6,5-billion-dollar worth acquisition of PartnerRe in 2015. 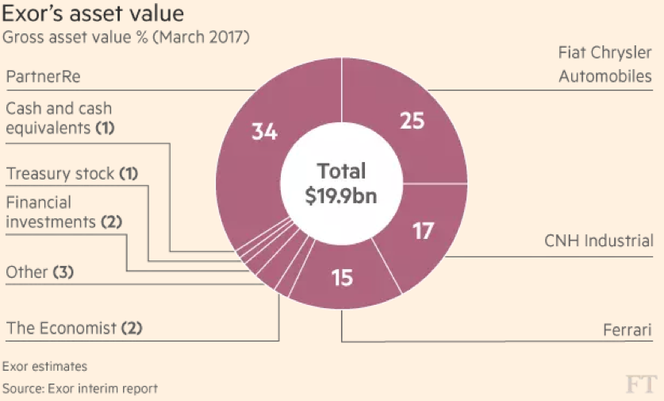 Anyways, analysts’ consensus points out that developing a sound and long lasting relationship with SMEs is more likely to be successful. The advice of experienced asset managers can in fact influence investees in strategic matters as well, which leads to a better performance of SMEs and to higher returns for investors, which is of course a necessary and sufficient condition. For instance, Tamburi Investment Partners return for their 5-year early investment in Moncler and Eataly totaled 223 per cent, as of March 2017.

It seems that the Agnelli family is somehow planning to step back to its roots, despite having moved its headquarters in the Netherlands and having sought expansion opportunities in the US under Marchionne’s will.  Though this has raised concerns among various Italian stakeholders, Mr. Elkann argues it is no longer, or at least not always, the case: “It has changed a negative perception of that group of people historically. There has been interest from midsized companies and how they could do that, how they could grow in America”. Is FCA willing to play a role in mentoring Italian SMEs in their growth?

As for the US scenario, it is not probably at his brightest for FCA. Firstly, FCA is likely to bear a 4,6 billion dollar fine for violating anti-pollution regulations set by US Environmental Protection Agency, quite the same treatment as their competitors Volkswagen. Secondly, Chrysler has to hedge against Donald Trump’s protectionist moves which are generally oriented towards protectionism. For carmakers though, Trump’s policies have already been clarified. He urged Ford to close their plant in Mexico in favor of a 700-million-dollar investment in Michigan and he threatened to impose a heavy cross border tax, to discourage General Motors from importing Chevy Cruze model from Mexico. FCA promptly responded by announcing a one-billion-dollar investment in the US, which Trump thanked with a tweet.