Which challenges does
​COVID-19 pose for the US aviation industry?

COVID-19 pandemic has destroyed several sectors in the US. However, the aviation industry has certainly been the most affected by the lack of mobility imposed by travel restrictions and social distancing. Although the decline has not been generalized for the entire aviation industry and air cargo demand has increased, US airlines are facing a very intense challenge.

Impact on passenger air traffic
Given the uncertainty, lock-down measures and travel restrictions, passengers air traffic in the US has experienced an unprecedented decline in the first quarter of 2020, despite the initial growth at the beginning of the year. In April, domestic passengers and international ones dropped by 96% and 99% compared to 2019. Less strictly restrictions and summer holidays have led to an increase in passenger air traffic in the summer period, although this has not reached the level the industry was counting on. Revenue passenger-kilometers had indeed risen for the fourth consecutive month in August but were still 75.3% lower than a year earlier.
According to predictions, next months will be easier for airlines. Air travel demand, in fact, is expected to pick up in the Q4, supported by an increase in bookings for end-year holiday, despite the rise in COVID-19 cases. However, we are unlikely to see a return to pre-pandemic passenger traffic before 2023-2024. In addition, vacationers will resume traveling faster than business travelers as companies that are recovering will ultimately restore travel and entertainment. Unfortunately, business travelers are essential for airlines because of the frequency they travel and the cabins and services they purchase.

Impact on air cargo
The air cargo industry includes companies that transport any property in an aircraft for a fee. Before the COVID-19, revenues from transporting cargo in planes accounted for less than 5% of the US travel and health restrictions locked people at home, causing the fall on air travel demand, whilst air cargo demand has been racing ahead of capacity. These carriers have indeed been used to transport medical suppliers and other goods to support global supply chain, making a reversal of fortunes for the aviation industry in its worst economic downturn. In March, American Airlines, for example, flew its
first scheduled flight carrying only cargo for the first time in 36 years.

Jet-Fuel price overview
COVID-19 pandemic emptied cities and stopped mobility; thus, the world is now burning less oil. In 2019, Aviation fuel demand accounted for just 8% of total global oil demand and because of the reduced air traffic this percentage decreased a lot affecting also global oil demand. The consumption of oil in the US has indeed reached its lowest level of the last 30 years and in the late April oil price fell below $0 for the first time ever. Given that fuel costs are approximately 25% of an airline’s expenses, there was some breathing room in terms of operational costs. However, on the other hand, companies like Boeing and Airbus are threatened by the fact they have spent years in collecting orders for planes they boasted could save millions in fuel. But with the prices failing they have seen their fuel-efficient aircraft orders canceled. 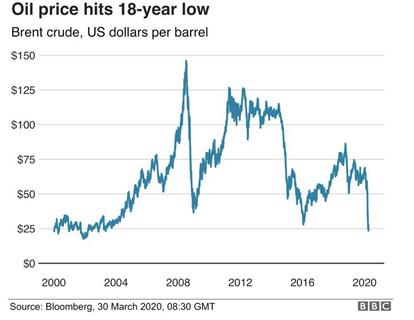 Impact on airlines
The pandemic has devastated the airline industry, leading US airlines facing the darkest period of their history. To prevent industry to collapse US government granted financial aid totaling $58 billion and lowered interest rates on loans. They expected this would be enough but the demand for air travel still remain a fraction compared to 2019, therefore airlines can’t afford to keep the workforce unchanged. Moreover, the demand for international flights, which require the highest number of flight attendants, crashed more than for domestic travel and it is also expected to recover slowly. According Airlines for America, a lobbying group that includes American, Delta and other U.S carriers in April U.S airlines had idled more than 44% of their fleet. Companies have also to pay the costs of health- related measures i.e temperature check and disinfection. That’s why on the road to recovery they must seek alternative sources of revenue. Cost- reduction initiatives and fleets rethinking will be critical measures to readapt business models and retire accumulated billions of dollars of debt.

Conclusions
In conclusion, the impact of COVID-19 on the aviation industry in the US has been dramatic and it will be years before we return to pre-pandemic levels. At the moment, airlines must try to reinvent themselves, placing greater emphasis on freight transport and increasing the number of domestic and short-haul routes.
​
Annalisa Sgaramella