​On October 25th 2019, following a three-day plunge, there was a sharp 40% increase in the value of Bitcoin within the span of less than 4 hours; being the third all-time increase of the currency jumping as high as $10,332 on peak hours. The cause of this price spike is theorized to have occurred as a consequence of China’s president Xi Jinping’s declaration that the country must “seize opportunity” to adopt blockchain, which is the technology underpinning cryptocurrencies such as Bitcoin. 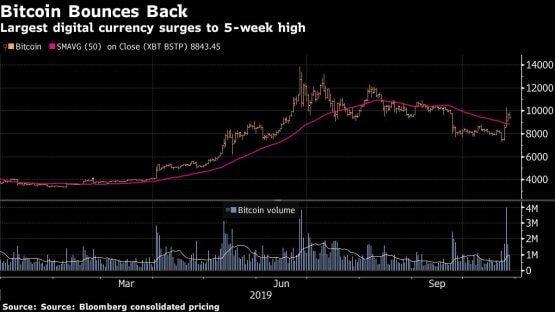 Furthermore, it should be wondered whether Chinese president Xi Jinping was indeed alluding to Bitcoin and all the other mainstream cryptos, and whether this whole market ‘shake’ was a foreshadow to China’s future goals.

It should be agreed that this is rather intriguing taking into consideration that China has taken a rough stance when it comes to crypto as market, since it forcefully closed all of its local trading platforms as well as going as far as to ban a fundraising exercise (initial coin offering) back in 2017.

As a matter of fact, China’s Central Bank, the People’s Bank of China has been working on its own cryptocurrency for almost five years now, with the project’s initiation originating by a small team that was set up in 2014 with the goal of reducing the costs that come with the circulation of paper-based currencies and has been rushed to finish its development due to the fierce competition of Facebook’s (along with some other companies) own digital currency ‘Libra’ being a promising new market with the potential to shake the market.

However, what differentiates China’s new currency apart from Facebook’s libra as well as Carney’s SHC, is that even though libra is currently in its early phase being just computer code and the SHC hasn’t progressed past very early development stages, the Chinese cryptocurrency is about to be launched. As a strategy advisor from within the developing team: “China is barreling forward on reforms and rolling out the cryptocurrency, and it will be the first central bank to do so”.

Paul Schulte, a former People’s Bank of China former global head of financial strategy who was engaged in the project stated that the central bank is planning to launch the new currency within the coming months, with highest possibility being November 11th which is ‘Singles day’, known to be China’s busiest shopping day; the plan is to issue it to seven institutions who then in turn will have the responsibility to disperse the digital currency to the 1.3 billion population as well as non-local businesses that transact in renminbi, which if successful could very possibly cause a rapid ‘snowball effect’ spreading to large foreign markets such as the US.

Thus, the recent turn of events have very effectively provided some food for thought as to what is coming in the following months, demonstrating the sheer size and influence the Chinese market has on cryptocurrencies without even their new currency having been actively introduced yet.

Concludingly, it can be interpreted that Xi Jinping was not expressing any interests regarding the already aforementioned existing digital currencies; however, he very successfully demonstrated the drastic influence that they can have on the crypto market and this move has very strikingly showcased the potential that the new crypto could withhold once it enters the market, sparking lots of interest for investors all over the world. Therefore, the crypto industry can potentially re- experience another, larger ‘shake’ in the upcoming months further expanding the already rapidly growing digital currency market.