Why South East Asia is so important to Alibaba

Ant Financial, Alibaba’s affiliate company, is in talks to lead a 600-million-dollar round of funding for the Indian company Zomato, after it acquired 10% stake last year for 210 million. This is only the latest move in the company’s broader strategy in South East Asia. Ant Financial controls the world’s largest mobile and online paying platform, Alipay, and has been expanding in the industry, acquiring companies in area, creating a vast network for digital payments. Zomato, funded in 2008, is one of India’s largest food delivery and restaurant discovery platforms, with an evaluation of around $2 billion. The deal could help Ant Financial create a more complete service platform, given it already has 40% stake in Paytm, an Indian payments company.

To date, Alibaba and Ant Financial have stakes in more than thirty industries around the world, and countries like India, Indonesia, Singapore, Malaysia, Vietnam and Thailand have seen growing investments from the two Chinese companies, although their biggest market remains China. The are several reasons behind the strong interest that Alibaba has in the area.

First, it is a 600-million-people, easily accessible, fast-growing market. The 10 countries members of the ASEAN (Association of South East Asian Nations, the intergovernmental organization which aim is to foster and facilitate economic development in the area), have seen a GDP growth between 5% and 7% in 2018, which does not appear to be slowing down any time soon. This is a big opportunity for the e-commerce industry, as the widespread consumes-backed growth will boost the activity of retailers, which will need to rely on digital platforms, like Alibaba’s already popular TMall, to expand their business. Moreover, there is no clear dominant player on sight, making it still an unclaimed market with vast margins for growth. 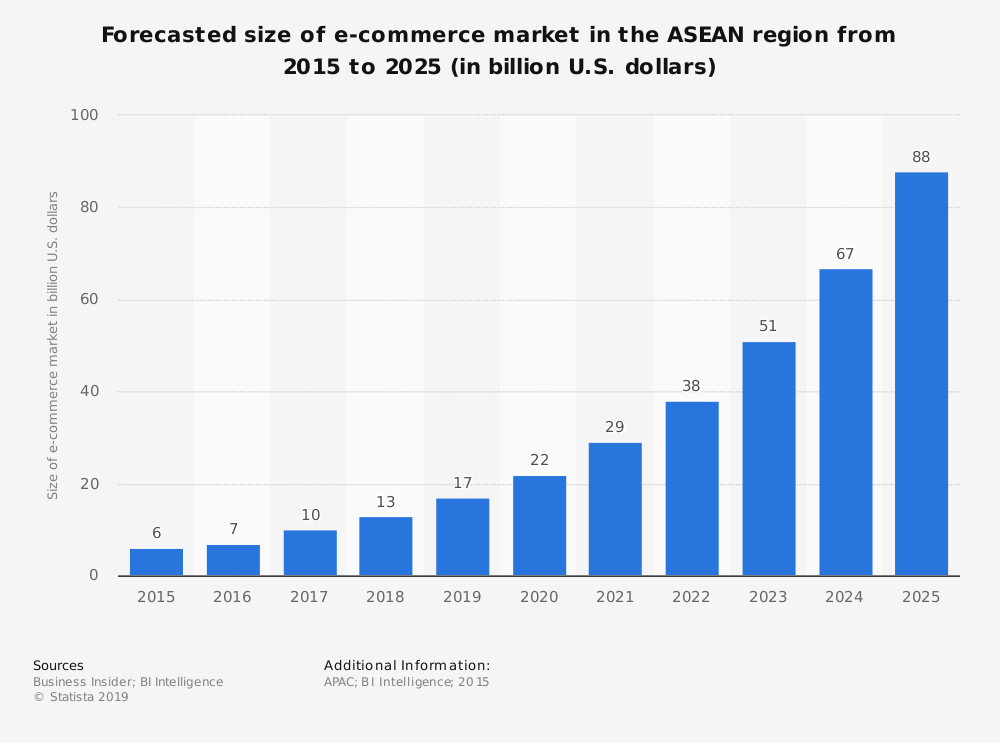 On the other hand, wilting growth in China has driven Alibaba to accelerate the putting into practice of what it calls local to global: expanding its already successful business model into new markets by acquiring stakes in key companies in other countries.

Another reason is the desire by the tech giant to create an international marketplace where local retailers will sell through its platform in their countries and around the world. Trudy Dai, president of Alibaba’s wholesale marketplaces division, has said in May that the strategy was part of Alibaba view from the beginning, and will now make small and medium retailers able to access the same online platform in order to sell their products and digitalize their entire value chain. The company’s strategy has been acquiring existing companies, like Lazada, of which between 2016 and 2018 acquired a majority stake for $4 billion. Lazada is currently the most popular app for online shopping in Malaysia, Philippines, Thailand and Singapore. Moreover, it invested $1.1 billion in Indonesia’s most visited e-commerce website Tokopedia and $500 million in India’s Snapdeal.

Alibaba’s massive investments have also been justified by the astonishing growth in revenues the company has been registering in the last years; to date, in fact, Alibaba holds 31 billion of cash on hand (according to 2019 Q2 results).

Finally, it is important to notice that Alibaba is not alone in its interest in South East Asia: Tencent, China biggest social media operator and game publisher, has shown a similar interest in the market, which it approached using a different strategy: instead of making investments, it adopted a more cautious approach, acquiring stakes in smaller companies, while still competing directly with Alibaba for a major role in the area. For instance, it has acquired stakes in companies in Swiggy, India’s biggest food delivery platform and Zomato’s direct competitor.

At the end of the day, China remains Alibaba’s biggest market, accounting for more almost 90% of its e-commerce revenues. Nevertheless, the interest of the Hangzhou-based company in South East Asia has been strong, and with China’s economy threatened by the trade war with the U.S. and a wilting growth, looking to enter other developing markets can be a way of maintaining good financial results while solidifying one’s position as a global player.