Will Petro cryptocurrency be enough to save Venezuela?

Nicolás Maduro, Venezuelan president, announced three months ago that Venezuela would launch its own new cryptocurrency named Petro. Following Venezuela’s worst economic crisis in history, the country’s currency Bolivar devalued to about 103.000 for one US Dollar, due to the incredible rise in inflation. In order to enable new ways of public debt financing, Maduro decided to walk down the cryptocurrency road, following the market’s positive trend that led Bitcoin and other cryptocurrencies to hit their peaks. As of the day when the president publicly announced the Petro, the rating agency S&P declared Bolivia to target default after its currency devalued more than 57% of its value. Through the new national cryptocurrency, Maduro hoped to get around the financial sanctions imposed by the USA and Canada. The US Government however, has already announced that any investment in the Petro would be considered as a violation of the international financial sanctions that affect Venezuela. 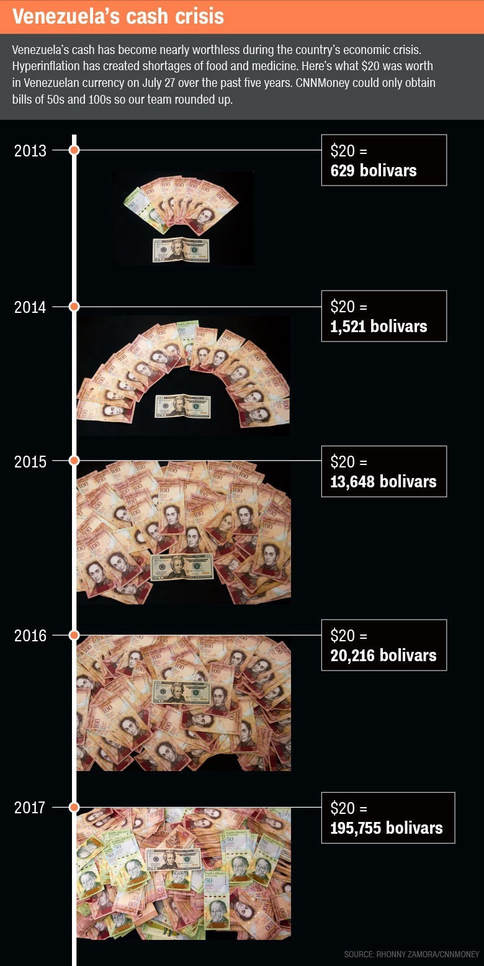 2017 refers to the beginning of the year. In December 1st, 2017, 1 US$ could buy 103,000 bolivars in the black market according to Bloomberg
From February 20th the Petro pre-sale has been launched. The cryptocurrency is backed by Venezuela’s petroleum, gold, gas, and diamond reserves. However, it is difficult to suppose that investors will have confidence in Venezuelan reserves, since the Government is not known for its credibility, and investors would require analysts to publish a valuation of the national reserves. It is difficult to forecast what is going to happen, since it is the first time in history we assist to the creation of a national cryptocurrency. However, it is possible to analyze some aspects and to speculate about some hypothetical future scenarios.
Firstly, it sounds arguable that “Petro” can be considered a cryptocurrency itself. In fact, by definition, a cryptocurrency has to be decentralized. Venezuela is instead trying to use a national cryptocurrency, which is backed mainly by the world’s largest oil reserve. It is more accurate to consider the Petro as a digital currency rather than a cryptocurrency, since it is not backed by networks like the “pure” cryptocurrencies. The Petro will likely become a Digital Fiat Currency, like the JCoin created by Japan, and therefore critics believe that it will probably not affect Venezuela’s economic situation deeply. The digital currency might help to facilitate transactions, but it will not help to overcome the financial sanctions, since it will be easy to influence, and so it will not drive Venezuela out of its structural economic crisis.
Petro is a solution President Maduro is trying to implement to issue a new form of international debt underpinned by the idea of the crypto technology. In fact, Petro will be backed by oil, but at the same time it will not guarantee any kind of security interest in oil. The digital currency can be analyzed as an unsecured oil-index debt forbidden by US and Canada, issued by a country that the rating agency S&P said to be in default.

Maduro announced that: “The Bolivarian Republic of Venezuela guarantees that it will accept Petro’s as a form of payment of national taxes, fees, contributions and public services, taking as a reference the price of the barrel of the Venezuelan basket of the previous day with a percentage discount”. It sounds like Venezuela is issuing a zero-coupon unsecured bond that could be used to pay taxes only in Venezuela, which makes it a difficult mission to convince foreign investors to buy the Petro.
Venezuela’s Government is however hoping for a crypto-bubble to explode in order to quickly collect resources for financing the increasing public debt. It is probably far too optimistic of an idea that investors will be willing to pay a barrel oil-index more than the price of the underlying value, without being able to convert it and without a real security interest in oil.
Further concerns rely on the fact that the Central Bank that will issue the digital currency is accountable for the monetary policies of the country, that oil has not been extracted yet, and even once it will 40% of it will be controlled by a joint venture.
And on top of all, the day this article is being written, one of the two Venezuelan lawmaking organs have just declared the Petro issuance to be illegal under domestic law, since it is unconstitutional.

“This is not a cryptocurrency, this is a forward sale of Venezuelan oil.” said legislator Jorge Millan. “It is tailor-made for corruption”. In the meanwhile, however, the pre-sale is said to have already raised $735 million just in its first day, and the Venezuelan Government is expecting to collect more than $3 billion from the issuance.
Only time will tell how this situation develops, in the meanwhile Venezuelans will have to bear the costs of this experiment over their own skin. Buena suerte Venezuela.