The portion of renewable energy amid sources of electricity in the U.S. has been spreading over 10% in the last decade, reaching almost 21% for the first time in 2020. Industry executives and analysts forecast that renewable business will continue to grow in 2020 and afterwards, as oil, gas and coal companies will struggle financially and seek bankruptcy protection to sustain the damages brought by the current crisis.

Despite the recent spread of coronavirus, demand for wind and solar farms remained unaffected, thus adding even more interest by investors to analyse those new sources of energy. A similar approach happened after the 2008 financial crisis, when that enthusiasm contributed to drive the rapid growth of the industry, which rocketed after the economy began recovering in 2010. According to Keith Derman, co-head of Ares infrastructure and Power at Ares Management Corp, the main advantage of renewable-power generation is its lack of correlation to oil and natural-gas markets, which further strengthen their overall appeal, and may be one of the first asset classes to boost its growth after this period.

US companies have recently increased the investment in these new sources of profitability and started to finance a high number of solar projects particularly in Texas, the U.S. oil and gas capital. The majority of solar investments are located in the Permian Basin, the centre of a U.S. shale oil industry that is now affected from the oil price war between Russia and Saudi Arabia and impact of the coronavirus crisis. According to the Energy Information Administration, part of the department of energy, this territory will cover a quarter of the record new industrial-scale solar capacity being installed across the US this year.
Furthermore,  a solar farm with the size of a small city will open in Texas this month, adding more competition to the US oil and gas industry that is already flat on its back.  The blue rows of panels at the Oberon photovoltaic project will be able to produce 150 megawatts of power when the new platform in Notrees, a community in west-central Ector County,
will be added to the project. Oberon’s developers achieve to expand the project in order to produce 1,380MW, that would be able to serve almost 230,000 homes. 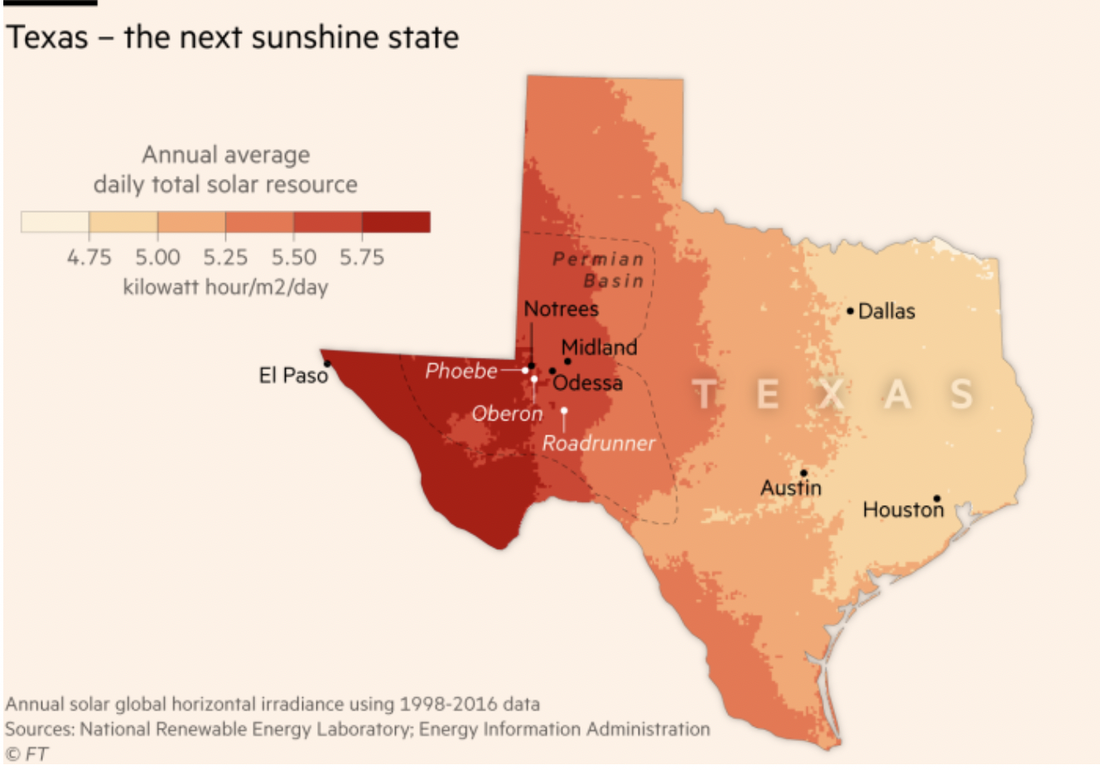 According to a Bloomberg and Business Council for Sustainable Energy survey, the cost of solar energy has plummeted, with the average industrial-scale of $0.80 per installed watt last year, less than one third compared to $3.53/W in 2010. Therefore, big corporate brands have taken advantage of falling costs to sign long-term solar power purchase agreements that will last from 10 to 15 years. The largest purchases who have been contracting for renewable energy in 2019 have been Facebook Inc., AT&T Inc. and Alphabet Inc, unit of Google, and since those corporations have made pledges to lower their carbon footprint in the future, these agreements will certainly bring benefit to their environmental images. Furthermore, the 13,600MW of clean energy deals that companies signed in the US last year, 5,500MW were produced in Texas and the majority of that was solar. 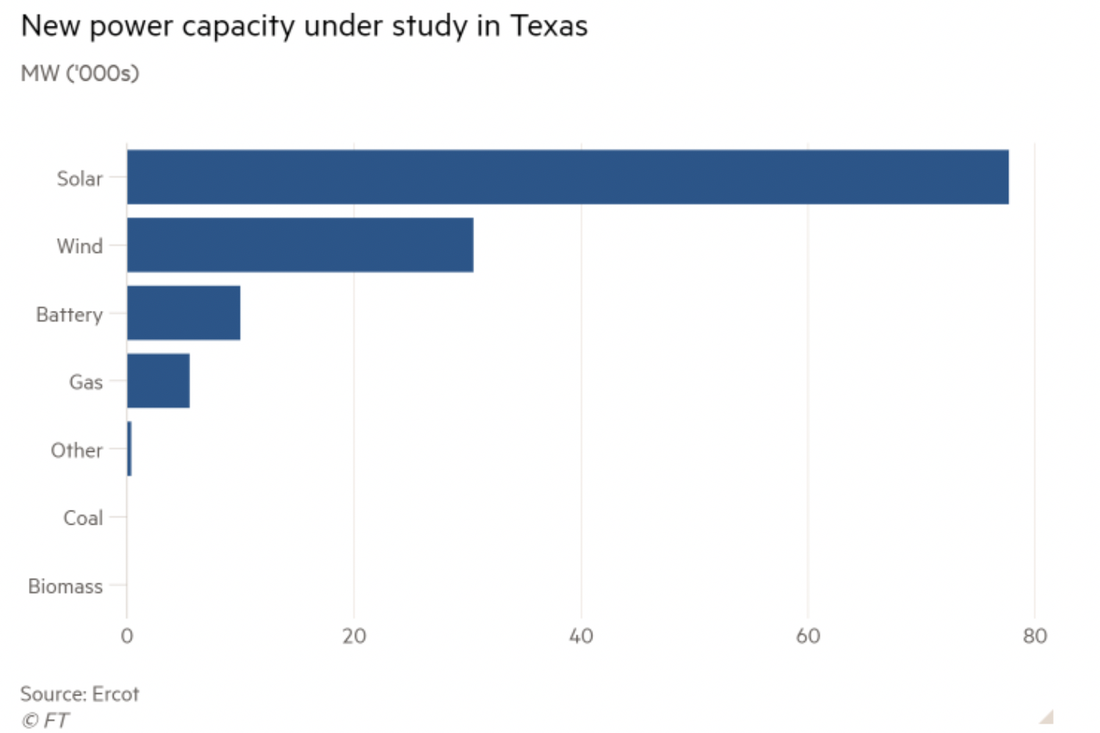 Source: Ercot
Renewable-energy companies are seeking support from Congress, either in the form of cash grants instead of tax credits, or extensions to allow deferred projects to still qualify for being financed. However, the $2 trillion coronavirus stimulus bill did not include renewable-energy projects and it is not clear whether any backing will be granted.

President Trump administration’s vision on sustainable energy has never been positive claiming that this source of energy is not powerful enough. Indeed, The Federal Energy Regulatory Commission approved a decree that limit the competitiveness of state-subsidised green power in PJM Interconnection, the biggest grid in the US, that links Virginia to Illinois.
On the other hand, market forces have conveyed a different outlook and described Trump as “the solar president” that will remove the most coal plants and installs numerous solar systems.
The cities recognized for their massive oil extractions will soon be significantly powered by clean energy,  and oil companies have begun to embrace solar despite the threat it represents to their gas sales. ExxonMobil, the world's largest publicly traded oil and gas company, aims to satisfy 70 % of its Texas power demand through 12-year purchase agreements of renewables from Orsted of Denmark. Occidental Petroleum, the largest oil producer in the Permian Basin, signed a contract with Macquarie to provide 109MW of solar power over 12 years. Furthermore, it also created its own smaller solar farm, whose energy will pump carbon dioxide underground to squeeze out oil.  According to OXY’s Chief Executive Vicki Hollub, the solar energy will contribute lower company’s carbon footprint but also a lower-cost electrical power.

In conclusion, as the price of solar panels fall, renewables are now challenging natural gas primacy in the US electricity generation mix. The EIA (Energy information Administration) estimated that renewables will reach gas as a source of electricity of US in 10 years, capping its market share after years of gains fuelled by the shale drilling boom.  Brooks Landgraf, a conservative state legislator from Odessa in West Texas and advocate of the oil and gas sector, predicts that as struggling oil companies cut workers,  solar projects will certainly offer more labour opportunities.