Following our recent article on the history, tactics and current trends on hedge fund activism, we now present a brief analysis of a recent activist campaign carried out by Carl Icahn through his investment vehicle, Icahn Capital Management, against HP’s Board of Directors as they refused to agree to the announced takeover bid by Xerox Holdings Corp. in November 2019.
This is an example of an activist campaign initiated to achieve one of the most commonly pursued objectives in the sector, i.e. the merger of two entities as a way to release shareholder value. As we will see, the strategy pursued by Carl Icahn is that of a publicity campaign backed by a formal shareholder proposal, as he directly addressed shareholders in a letter published on December 4th 2019, and by threatening to start a proxy contest in the following months. We will start by giving a brief overview of the companies involved in the merger, followed by a timeline of key events occurred during the campaign as well as the key rationale for the takeover and Icahn’s investment thesis.

HP Inc. is a multinational IT company, headquartered in California, provider of a wide range of products, software, technologies and services, in particular personal computers, printers and related services, to retail customers, enterprises and governments. HP Inc. was created in 2015 after Hewlett-Packard split into two companies, HP Inc, the legal successor, and Hewlett-Packard Enterprises, which was listed as a newly traded company. At the end of the fiscal year 2019, HP Inc. reported $58.8 billion of net revenues, 56,000 employees worldwide and had an overall market capitalization of $28 billion.

Xerox Holdings Corporation is an international company, headquartered in Connecticut, providing printers, copiers, digital products, and technological services in more than 160 countries worldwide. As for the fiscal year 2019, Xerox generated $9.1 billion in revenues, had 27,000 employees worldwide and had a market capitalization of approximatively $8 billion, less than 1/3 of HP’s.

Carl Icahn is an American investor and founder of Icahn Enterprises. He was born in Brooklyn in 1936 and graduated from Princeton University with a degree in philosophy in 1957. During his life, he has hold controlling positions in various companies, including Motorola, Netflix, The Hertz Company and Herbalife. Pursuing takeovers and forcing decisions, Icahn has become one of the most influential activist shareholders around Wall Street.

At the beginning of November 2019, Xerox offered a $22 per share takeover bid to HP Inc., which represented a 37% gain from the closing price of $16.03, reached nearly a month before, on October 10th 2019. The bid announcement was preceded by HP’s statement in October 2019 to commit to organize a restructuring plan by the end of 2022 that would save almost $1 billion a year to stabilize the company.

The rationale for the deal was based on expected synergies of $2 billion to be effective within 24 months as well as on diversification grounds. In particular, $0.5 billion of synergies were expected to come from economies of scale, combining supply chain and distribution footprint and $1.5 billion in cost savings from R&D and corporate functions. “I believe very strongly in the synergies,” Mr. Icahn asserted to WSJ, adding that “there will probably be a choice between cash and stock, and I would much rather have the stock, assuming there’s a good management team”. Furthermore, he declared that companies that consolidate in an industry that is shrinking tend to have higher than expected and more stable cash flows. The merger could have in fact explored new markets with high growth potential, such as 3D Printing, Graphics, Workflow Software and Textile Printing.

On November 17th 2019, HP’s Board of Directors unanimously rejected the takeover bid by Xerox, claiming that the offer would undervalue HP and would not be in the best interest of shareholders. As a result, on December 4th 2019, activist investor Carl Icahn, who owned at the time approximately 10.85% of Xerox and 4.24% of HP, wrote a heated open letter to HP shareholders, expressing his disappointment to the board for the rejection of the bid. For instance, Carl Icahn boasted his prior achievements in generating value as an activist for his firm, Icahn Enterprises, as well as for the other shareholders and accused the top management to have acted in a selfish way, disregarding the best interests of all shareholders. He concludes his letter by addressing all shareholders and proposing a formal shareholder resolution strategy:

“I firmly believe that HP shareholders deserve the opportunity to decide for themselves whether a combination with Xerox makes sense before the idea is summarily rejected by HP’s board for reasons that may not align with the best interests of the company’s shareholders. I implore all HP shareholders who agree with me to reach out to HP’s directors to let them know that immediate action is necessary to explore this opportunity NOW while there is still a willing counterparty on the other side.”

After the early rejection from HP’s board, Xerox launched a second acquisition offer on February 10th 2020, boosting the price to $24 per share, valuing the company at roughly $34 billion. The announcement came after a series of meetings with HP’s shareholders that discussed the potentials merger synergies of the combined entity. Xerox stated that the revised offer would facilitate HP’s shareholders to “accept Xerox’s compelling offer despite HP’s consistent refusal to pursue the opportunity.”

In the following paragraphs we will have a look at the opposing views of Carl Icahn and the Board of Directors concerning the prospective takeover, as well as Carl Icahn’s investment thesis for the stakes he owned in Xerox and HP at the time of the announcement. 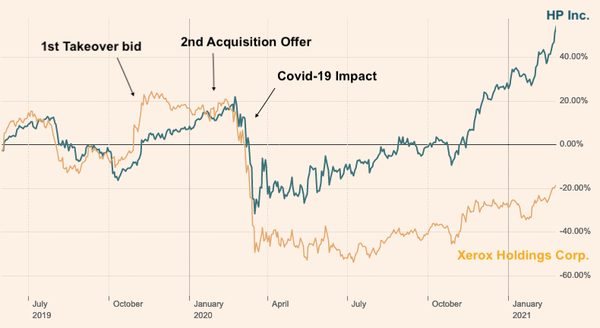 HP Inc. vs Xerox Holdings Corp. Share Price Comparison (Source: FT)
Carl Icahn’s View
​
By the time Xerox announced the takeover of HP, Carl Icahn owned a significant stake in both companies involved in the transaction. In particular, the activist investor owned 10.6% of Xerox shares and a $1.2 billion interest in HP. HP shares were bought from April to August 2019, reaching a total exposure of 4.24%. This quota did not reach the threshold of 5% which requires public disclosure, a typical move that Icahn makes when he is not ready to launch an activist campaign. Indeed, he declared that he had not thought of any deal with Xerox when he started buying the shares. Nevertheless, he later stated “I think a combination is a no-brainer” when he reviewed the potential merger between the two firms, pointing out synergies, cost savings and diversification opportunities.
​
Carl Icahn is known for seeking undervalued and struggling companies, with the aim of working with management to explore market opportunities and unlock value for shareholders. In order to maximize his exposure, the American businessman boosted his investment in Xerox in November 2019, reaching a total of more than 28 million shares. The potential takeover of HP was indeed considered as the strategy to pursue growth and profitability.

Carl Icahn Holding History of Xerox (Source: Gurufocus)
Board of Directors View
​
The Board of Directors unanimously rejected Xerox bid stating that it was not in line with the interests of HP shareholders. The offer valued the company at 22$ per share, 77% cash and 23% stock, which comprised $17 in cash and 0.137 Xerox shares for one HP share, for a total transaction value of $33.5 billion. In a letter written to John Visentin, Xerox’s CEO, on November 17, 2019, the Board of Directors concluded that the offer was significantly undervaluing HP. The 20% premium (with respect to the closing price of $18.40 on November 5, 2019) was not considered sufficient. One of the main points raised was the “highly conditional and uncertain nature of the proposal, including the potential impact of outsized debt levels on the combined company’s stock”. In fact, Xerox was planning to finance the acquisition by raising a $24 billion credit facility, which would have been added to the already existing $3.2 billion long-term debt, so that the resulting debt-to-equity ratio from the merger would have increased significantly, and the burden of this additional leverage would have fallen on the shoulders of the combined entity, forcing it to bear all consequences. The decline in Xerox’s revenues from $10.2 billion to $9.2 billion since June 2018 was also questioned, mostly considering future prospects and business opportunities.

Moreover, HP was conducting a restructuring plan aimed at cutting costs by reducing workforce by 16%. Through a combination of early retirement and exits, between 7000 and 9000 jobs will be cut, creating $1 billion in savings by fiscal year 2022. The Board of Directors hence assessed that this strategy, together with a strong repurchase of shares, was not compatible with Xerox merger.

Conclusion
​
Soon after Carl Icahn started his activist campaign to pursue the merger, the world was struck by the Covid-19 pandemic and the subsequent global economic crisis. Therefore, as of March 31st 2020, Xerox dropped its bid to acquire HP citing that the global crisis produced an outlook that was not conducive to continue to pursue an acquisition of HP Inc. The market capitalization of both companies plunged significantly throughout 2020, with Xerox becoming the third worst performing stock during Covid-19, as its price fell by 54.5%. By August 18th 2020, following the development of the global pandemic and related crisis, Carl Icahn had exited his HP stake, realizing an estimated loss of 18.89% on his initial investment in 2019. At the same time, he boosted his Xerox holdings, reaching 17% of total shares outstanding by February 2021. While Icahn’s strategy behind his recent increase in Xerox’s shareholding is not clear yet, this still represents a strong signal in favour of Xerox’s stock as we might expect further developments to occur moving forward, as the economic recovery from the pandemic proceeds.