Japan's biggest search engine and messaging app are set to merge under a deal agreed by their parent companies. Masayoshi Son, the founder of SoftBank (that is the parent of Yahoo Japan), is trying to orchestrate a deal between Yahoo Japan and Line that values the messaging service at $11.5 billion. SoftBank and South Korea’s Naver Corp. will take Line private and then fold Line and Yahoo Japan into a new joint venture. The deal requires shareholder approvals and is scheduled to close by October 2020.  At the moment, the two companies have a combined market capitalization of roughly $30 billion. The aim is to build a tech business that can survive in the "winner-takes-all" world of Google and Facebook.

It seems that Japanese companies could not individually compete in the global internet sector and could even lose their home markets unless they develop a worldwide presence. The situation has become particularly critical at a time when global tech players such as Google are rapidly expanding their operations and hoovering up valuable data related to a wide range of user activity. The merger, engineered by the two groups' parent companies, is partly an attempt to protect the Japanese market from encroachment from outside.

The first contact between the two companies had been at the beginning of this year, when, among the others, Kentaro Kawabe, CEO of Z Holdings, the SoftBank Group-backed operator of Yahoo Japan, and Takeshi Idezawa, CEO of Line, which is majority-owned by South Korean internet group Naver met. The executives, who also included Takao Ozawa, senior management corporate officer of Z Holdings, and Jun Masuda, director of Line, later held a series of meetings in Tokyo and elsewhere. In early September, Lee Hae-jin, founder of Naver, visited the Tokyo head office of SoftBank Group for talks with Chairman and President Masayoshi Son. The two agreed that Z Holdings, Yahoo Japan's official name, and Line should merge.

Despite Google's global offensive, starting in the 2000s, for search engine market share, South Korea is one of the few countries where it has failed to grab a majority hold. Naver still holds 80% of the domestic market. Although Naver’s founder has succeeded in protecting the company’s home market, he has been pushed into a corner due to competition with big U.S. and Chinese IT groups. 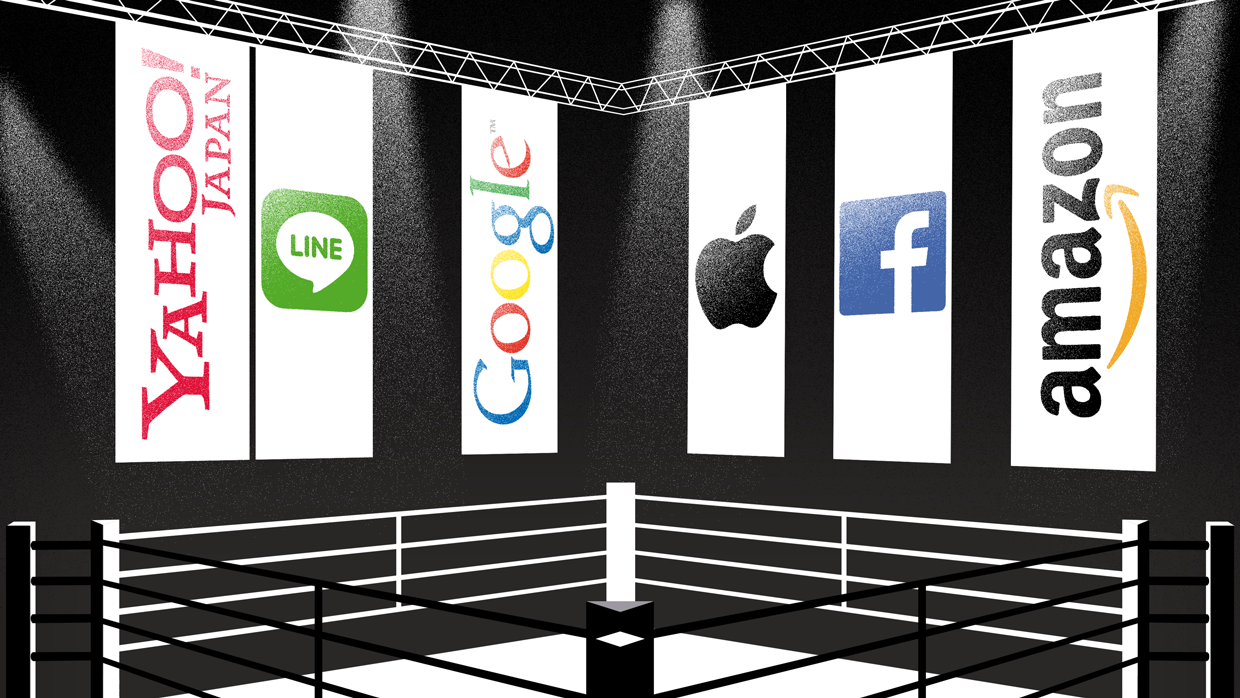 While Yahoo Japan and Line respectively have some 67 million and 160 million monthly users of their services, the biggest tech companies each have more than 2 billion. In contrast, with a total of 20 billion yen ($184.34 million) set aside annually by Yahoo Japan and Line for research and development, the Big Four tech companies known as GAFA -- Google, Amazon, Facebook and, Apple -- each spend trillions of yen.

An official at one GAFA member dismissed the Yahoo Japan-Line deal as "too small in scale to care about".

During the merger negotiations, Z Holdings and Line agreed to strengthen their combined internet platform in Japan before expanding to Asia and the rest of the world. The pair will create a platform serving 100 million customers in Japan. However, this will not be enough to expand the scale of their operations unless they win market share overseas and earn capital for R&D investment.

As regarding Line, it is experiencing some difficulties, including a shortage of funds for financing sales promotions and competition in mobile payment services. Starting with its messaging app, Line offers services including payments, taxi-hailing, and shopping, including some that are not available in Japan, such as "Line TV" video streaming and indoor theme park.

A positive sign has come from Thailand. According to a British research company, the messaging app Line has been used by 84% of the country's 70 million population in 2019. However, Line has failed to achieve the same success in other countries. Although it once had 30 million users in Indonesia, the number has dropped to 16 million. 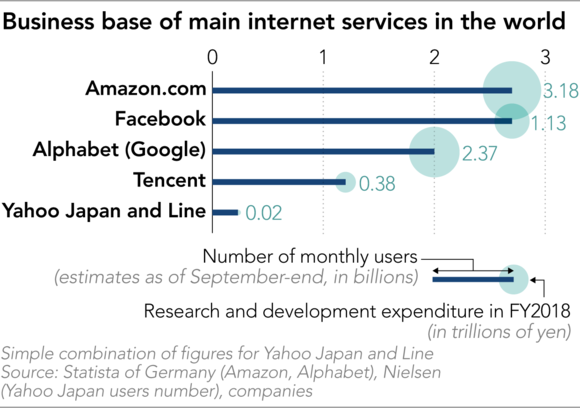 Together, Line and Yahoo Japan, which now operates as Z Holdings Corp., will be able to share engineering resources, access broader sets of data and invest more in areas like artificial intelligence, the chief executive officers said in a Tokyo press conference.

Under the proposed transaction, Z Holdings and Naver will buy out Line’s public shareholders in a tender offer at a projected 5,200 yen per share, a 13% premium to Line’s share price before news of the talks. Each company plans to spend 170 billion yen ($1.56 billion) on the bid. Naver already owns 73% of Line, while SoftBank Corp., the domestic telecom arm of Son’s business empire, holds a roughly 44% stake in Z Holdings.

After taking Line private, SoftBank and Naver will undertake a reorganization that will eventually result in a 50-50 ownership of the new company. The combined entity will hold stock in Z Holdings, which will remain public with Yahoo Japan and Line as wholly-owned subsidiaries.

SoftBank and Line have increasingly competed in fields such as digital payments, and an alliance may allow them to save money on expenses like subsidies. Both companies have also been investing in artificial intelligence to improve their services. While the announcement didn’t say how the mobile payment rivalry will be resolved, it said the resulting company aims to spend 100 billion yen annually on the development of AI-powered products.

“Big data is key for the future of both companies,” said Koji Hirai, the head of M&A advisory firm Kachitas Corp. “The merger will enable them to create a massive repository of client data.”

Idezawa and Kawabe said there are potential synergies in several services areas spanning media content, fin-tech, advertising, communications, and commerce, but didn’t give further details. The combined company will also have about 20,000 employees, a major benefit in an industry where competition for talent intensifies year after year, they said.

It follows an infographic which sums up the steps to the planned merger.