Yen as a Safe Haven Currency

Despite North Korea threats, Yen is still a safe haven currency thanks to its attractiveness and carry-trade strategies. ​
Nowadays, it’s not even surprising if the head topic in newspapers is about one of the several provocations of “The Rocket Man”, alias Kim Jong-Un. Although this fear is a tangible one for South Korean and Japanese citizens, it doesn’t look like a threat for financial markets since Yen, the national currency of Japan, is still used as a safe haven in periods of financial instability. Why does it happen? And why risk-adverse investors don’t fear the Rocket man’s provocations? Let’s understand what are the Yen properties and how this currency has become a “safe heaven” for investors.
First of all, let’s give a look at Yen correlation with S&P500 and compare it with the Gold one (correlations are calculated comparing the last 60 monthly returns of these 3 asset classes before the date of observation and they are rolled over every 6 months).

As it is shown in the graph below, in the last 15 years Yen has always behaved as a refuge for investors being negatively correlated with the market represented by S&P500. It’s surprising that this has been true especially during the Great Recession, when Yen-S&P500 correlation reached the -0,4 level in 2008 while gold, during this period, has started to be positively correlated with the market. Investors can exploit Yen behaviour in order to differentiate their portfolios to reduce overall performance volatility, making this currency a “safe haven”. “We find that the US Treasuries and Japanese yen are the strongest safe haven investments in months characterized by large declines in market value or excessive volatility” stated Kopyl and Lee (2016) in their research confirming what was already demonstrated by Botman, de Carvalho Filho, Lam (2013).
An explanation for what this graph shows could be given by the Yen’s attractiveness. This appears to be a combination of factors, mainly represented by the size of Japan’s foreign assets. Japan’s net foreign asset position, considered as the sum of foreign assets held by monetary authorities and deposit money banks minus their foreign liabilities, is very significant (5th country in the world for the size of net foreign asset in 2012 according to Worldbank database and with $1.09 trillion of U.S. Treasuries as of June 2016, the largest overseas holder of securities after China, according to the U.S. government). In period of instability, investors believe that Japanese institutions could repatriate large amounts of foreign assets reducing the negative effects of high volatility. For this reason, Mitul Kotecha, head of Asia FX & Rates Strategy at Barclays Plc, interviewed by Bloomberg TV in August 29th, 2017, believes that “The yen is therefore always going to have this safe-haven bid when you do see bouts of risk aversion”.
A second potential explanation of Yen behaviour is given by carry trade strategies. The carry trade is a strategy in which traders borrow a currency that has a low interest rate and use the funds to buy a different currency that is paying a higher interest rate. Yen is a low-yielding currency in which investors usually get into debt to fund purchases of other high-yielding currencies. The effect of a yen carry trade weakens the currency in normal periods but, when those carry trades unwind during high volatility times, the yen appreciates. “The yen is a cheap currency” Mr. Kotecha said; “that also helps it gain in these environments where we do see risk aversion continuing to intensify”.
Although Rocket Man is a fear for Japan and other Asian countries, he is not worrying investors. As shown in the graph below about recent Yen performance, investors are more interested in Yen’s characteristics than in Kim Jong-Un’s missiles, confirming what we already knew about this currency. 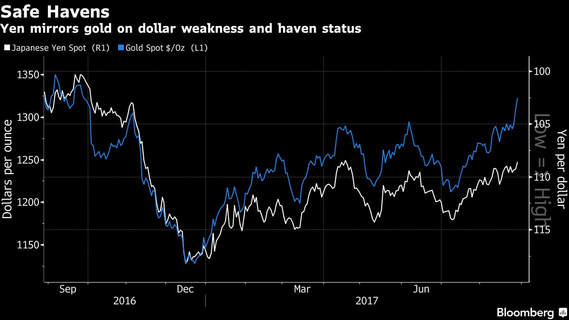