Yet another loss within Credit Suisse - will Archegos default be the last one?

Introduction
On March 29th, Credit Suisse disclosed $4.7bn of exposure to losses deriving from a $20bn fire sale by Archegos Capital, a US-based family office founded by Bill Hwang. The announcement sent the shares of the Swiss institution down by 14% and drew the attention of several regulators, while two top executives were fired in the umpteenth pursuit of a scapegoat. Mr. Hwang, a wall street veteran previously convicted of insider trading, entered into swap contracts with several financial creditors in order to leverage its risky positions. They however seized all his assets as he started missing margin calls. Yet, the Swiss lender had larger exposure and reacted slower than others, thus suffering substantial losses.

This shock comes right after the disclosure of $2.3bn of exposure to Greensill related loans, two risky trades that might erode all profits of the lender for the next fiscal year. Nonetheless, they are just the last of a continuous series of scandals affecting the institution: in 2020 it revealed a $450m impairment against York Capital Management and declared a $680m exposure to 2007 mortgage-backed securities, in 2019 it sold $1bn Wirecard convertible bond to investors and admitted spying on top executives, which topped the several other wrongdoings suffered in the last decade.

From this, questions have risen: Are these just isolated episodes or are they a consequence of systemic malpractices? Is there a need for new and better-suited regulations? Which reactions should we expect from banks and financial institutions?​
What is prime brokerage?
The prime brokerage activity consists of a series of services that investment banks and other financial institutions offer to hedge funds and other institutional investment clients, such as family offices. Some of these services include securities lending, leveraged trade execution, cash financing and management, capital introduction, risk management, and other back-office functions. In particular, prime brokers’ activity needs a level of resources many institutions may not be able to have in-house, indeed this activity is often provided by most of the largest financial services firms, including Credit Suisse. The instruments through which these institutions offer financing are margin loans, securities loans, repo, and OTC derivatives.

The fault of the prime brokerage division of the bank has been to allow Archegos to accumulate serious leveraged positions in individual stocks. Credit Suisse and other banks negotiated with Archegos a particular derivative called total return swaps, a type of contract that allows the user to have economic exposure to a stock or a portfolio of stocks without holding the underlying shares or disclosing their positions publicly to markets: a hedge fund may be heavily exposed through swaps with multiple banks without being subject to disclosure laws that a very large shareholder would be. This derivative allows it to take huge positions with limited funds. The hedge fund pays investment fees to the investment bank and an interest rate such as Libor, in exchange the bank makes payments based on the total return of the assets. If the underlying asset declines in price, the fund should pay the bank both the fees plus the negative returns of the stocks.
In theory, prime brokers should be able to hedge all their exposures, making only a small margin on their activities, but in practice perfect hedges are rare.

Another important observation regards the decision of the Securities and Exchange Commission that investors are not required to disclose positions in equity derivatives like total return swaps unless they have voting power over related shares. So, even as Archegos was estimated to have had exposure to more than 10% of multiple companies’ shares, it didn’t have to report those positions. For this reason, banks could not know that they were lending to the same client at the same time and didn’t manage to hedge their position to the real exposure the client had.​
What happened and why?
In the Credit Suisse – Archegos scandal, Archegos had taken bets on stocks using money borrowed from Credit Suisse and pledged shares as collateral with Credit Suisse in the form of a TRS. When Viacom CBS, a stock that Archegos pledged as collateral, began to fall, Credit Suisse asked Archegos for a margin call. Archegos could not meet this, and Credit Suisse began selling off Archegos collateral stocks. The financial services industry is not a monopoly, many banks offer Prime Brokerage services and so Archegos also engaged in TRS with other Wall Street banks such as Goldman Sachs, Morgan Stanley, and Nomura. When all these banks started to sell Archegos collateral stock, it prompted a huge $20bn fire sale. Credit Suisse was too late to the party, and by the time they started aggressively selling off stock, the prices had nosedived, and they could not recover their money.

Value of the portolio of positions block. Source: Bloomberg
The scandal stems from failings in Credit Suisse’s risk management and compliance, along with the negligence of stock market regulatory authorities. Archegos was able to leverage 3 times the actual capital it had invested in stocks through using TRS. This amount of leverage is extremely risky and places huge exposure on the investment bank offering their prime brokerage services and the middle office of the bank should have tackled the issue early. Had they done so, it would have prevented the fire sale and Credit Suisse losing $4.7bn. On more ethical grounds, there was also a sense of naivety from Credit Suisse. Bill Hwang is a notorious investor who was found guilty of insider trading in 2012 and subsequently banned from the Hong Kong stock market in 2014. Credit Suisse should have been especially cautious with Bill Hwang given his previous antics and that he was coming to Credit Suisse asking for risky instruments.

Archegos did not operate as a traditional hedge fund, nor was it subjected to the same regulations as a hedge fund. It was registered as a “family office”, where it is exempt from reporting requirements from both the SEC and the CFTC. Bill Hwang took this as an opportunity to inject huge amounts of money and risk into the market without the financial regulators knowing anything about it. Had these rules not been introduced under the Trump administration, regulators would have noticed the amount of risk that Archegos were flooding the market with and take appropriate actions.

It begs to ask the question: have investment banks really learned anything about using risky instruments since the Global Financial Crisis?
Impact of Archegos' default on Credit Suisse
The Q1 report highlights a -757m CHF income before taxes (a 2bn decrease from Q1 2020), due mainly to net provisions for credit losses of 4,394m, up from just 138m Q4 2020. In order to mitigate the impact on the capital, Credit Suisse was obliged to issue 6 months mandatory convertible loans totalling 1.78bn. The issuance of bonds was mainly aimed at strengthening their capital position whilst ringing the CET1 ratio to 13%. Additionally, they stopped the stock repurchase program and reduced ordinary dividends to 0.1 CHF. 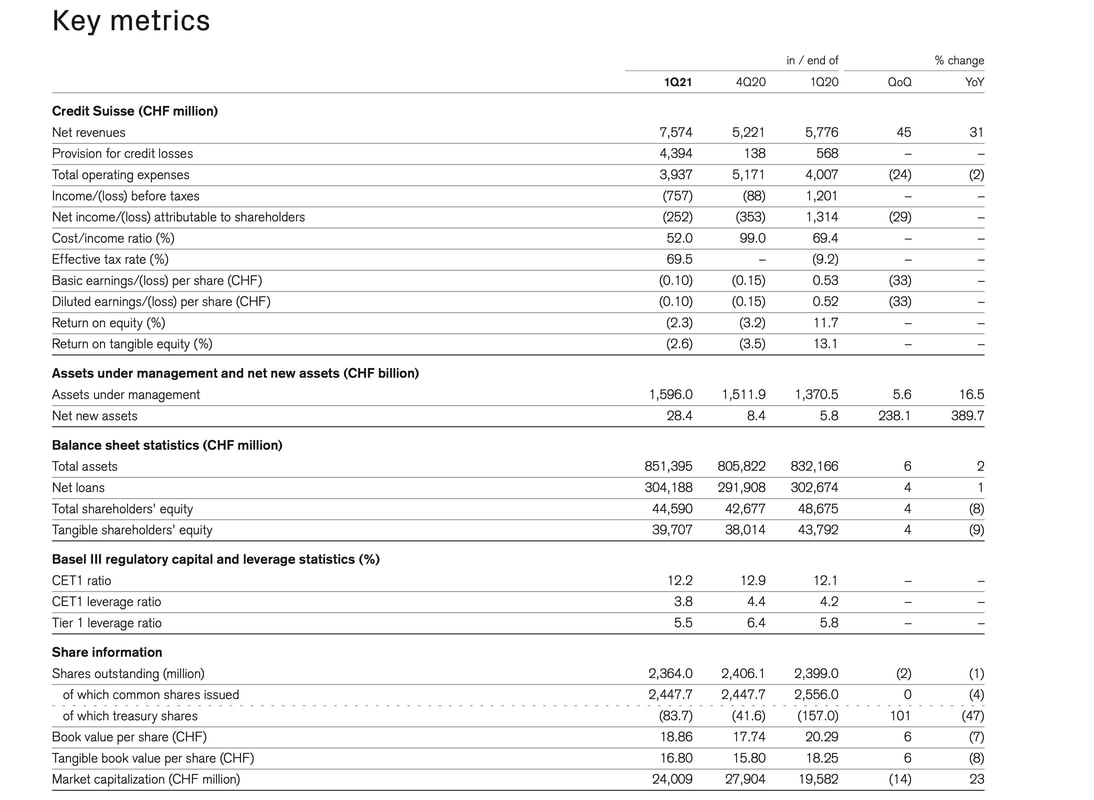 Credit Suisse Q1 2021 Earnings Release. Source: Credit Suisse
The Board of Directors launched an independent investigation, to be conducted by external advisors both on the supply-chain finance and the family office matter. These examinations are not only aimed at considering the direct causes and consequences of the two scandals but aim to find the underlying malpractices repeatedly undermining the profitability of the Swiss institution. Following the failings in risk management, extensive reviews have been ordered across the investment bank, which will be in close cooperation with the Board of Directors. 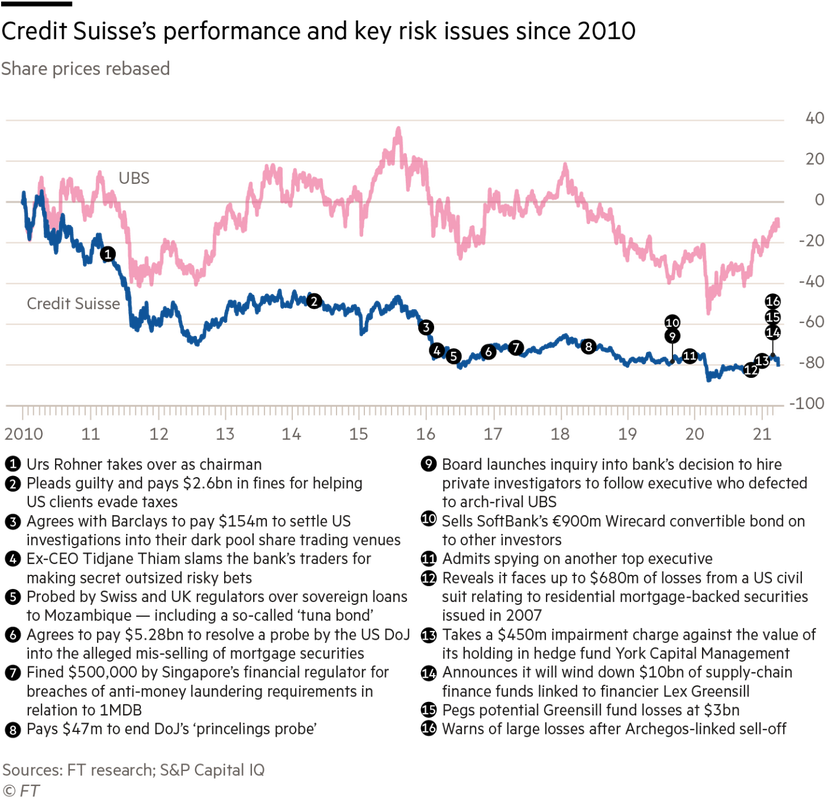 Credit Suisse' performance and key risky issues since 2010. Source: Financial Times
Linking towards politics, the Biden administration is trying to reduce the freedom of family offices following the fallout of the scandal through increasing corporate tax rates and regulating which investments can be considered as long-term or short-term capital gains. As family offices try to reclassify investment as long-term capital gains in order to reduce the rate they are taxed at, these more stringent rules will reduce their ability to do so, therefore increasing their overall tax rate. The aim is to force family offices to rethink their choice of entity. Furthermore, in the case of a firm owning more than 10% in a public company, they are obliged to report to the SEC, an obligation which is missing under swap contracts. However, as the consequences on the owned company are the same under swap contracts, the rules on disclosure should be amended to increase transparency and integrity.
Conclusions
The recent Archegos scandal has highlighted negligence within the bank and wider regulatory authorities. We have witnessed an immediate reaction in accordance with protocol: firings within the investment bank and risk management, an order for reviews to be conducted, and an issuance of convertible bonds to alleviate shortcomings in capital. Nonetheless, regulators and banks should start questioning their long-established practices as such events are continuously unfolding. As with everything, we must adapt to changing environments, and regulators must respond to the various new financial vehicles that are currently poorly regulated.
BSCM would like to thank FactSet for giving us access to their platform and providing charts and data.
Matteo Roberto Facta
Zaiim Premji
Edoardo Zanetta
Want to keep up with our most recent articles? Subscribe to our weekly newsletter here.