During his last speech on October 19, at the 19th National Congress of the Communist Party, the chief of the PBoC, Zhou Xiaochuan, has highlighted with Olympian calm the excessive leveraging that the Chinese corporate sector is facing. This has been his third significant intervention in October after the interview published by Caijin magazine on Oct. 9, where he has expressed the need for a more open capital account, and his intervention during the last IMF panel regarding the ideal financial reforms needed to complete the long-term passage into a more open Chinese economy.
After fifteen years in charge, Zhou Xiaochuan has accomplished many of his own targets in terms of a more open economy and financial reforms implementation. He is at the end of his mandate and he is trying to warn his successor and, above all, the Party about what should be the primary objectives in terms of financial reforms and systemic risk control. In his last speech at the National Congress, he has assured that the situation is under control and far from an imminent “Minsky moment”.
The corporate debt is around 160%-180% of the GDP, but, as discussed in the last IMF panel by Mr. Zhou, the debt in the hands of non-publicly participated firms would be 120% of the GDP. Of course, this 35% of debt gap should be considered as government debt that would increase from 36% to roughly 70%. The total debt to GDP in China has reached 300%, an alarming figure even for an emerging market economy. After a new boost of credit supply to keep growing enough for the long-term GDP target with 6-time interest rate cut from November 2014 to the end of 2015, the credit supply growth rate has begun a reassuring decreasing trend and it is expected to be around 13% YoY at the end of this year.

An interesting fact that can affect the Chinese financial system and create the same problem that European banks are facing is the possibility of a slowdown in Chinese growth which could cause a NPLs problem (Exhibit 2), given that the 70% of the increase in credit in the past 8 years come from state-owned and controlled Chinese banks. Most of this debt is backed by commercial real estate properties and equipment that has fueled the Chinese economic miracle even during the global economic slowdown of the last decade. This Corporate debt burden cannot any longer be carried by Chinese banks and probably the focus of the next financial reforms will be on channeling this debt in the financial markets by spreading the risk throughout international investors and widening the source of financing that Chinese corporations have. 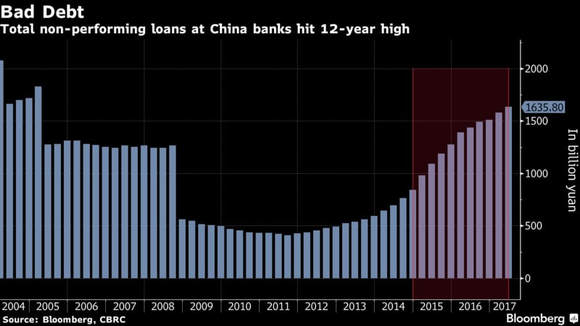 Exhibit 2
On one hand, Mr. Zhou warnings could seem inappropriate in this period where the Asian economy is beating expectations and accounts for 63% of the World GDP growth. On the other hand, this positive momentum could be a great chance to improve capital allocation and repaying the excessive debt without affecting growth.
Riccardo Nocita​