On November 8th, CommScope Holding Co., the US telecommunications equipment producer, announced it would buy set-top box maker ARRIS International Plc for a total cash consideration of $7.4 billion, including the repayment of the target’s debt.

The deal will create a U.S. powerhouse in telecommunications networking equipment with revenues of $11.3 billion, Adjusted EBITDA of $1.8 billion and Free Cash Flow of almost $1 billion. 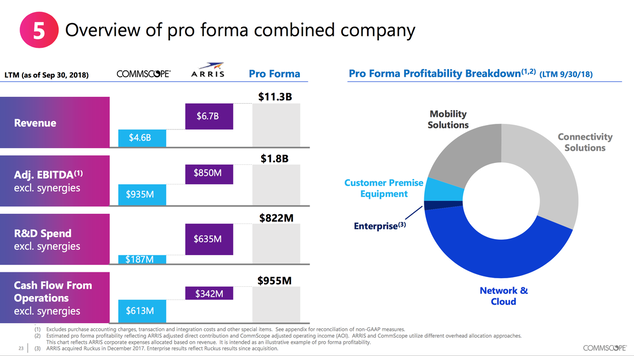 Source: CommScope Investor Relations
​A strong reason to pursue this deal is represented by the enthusiasm to create a key player in infrastructure network that will be able to fully take advantage of new Industry trends, such as the advent of 5G and the Internet of Things. Indeed, telecommunications companies have been investing billions of dollars to upgrade their infrastructure in order to handle innovation and technology disruption. Therefore, the deal represents a great opportunity for the combined company to increase its penetration opportunities in a growing product-addressable market, offering comprehensive solutions to its customers by combining excellent capabilities in network access technology and infrastructure. 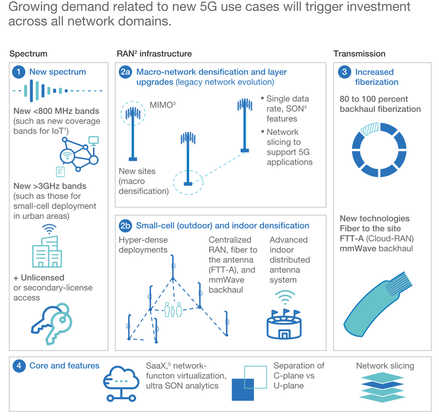 Source: McKinsey & Company; The Road to 5G: The inevitable growth of cost infrastructure
​“CommScope and ARRIS will bring together a unique set of complementary assets and capabilities that enable end-to-end wired and wireless communications infrastructure solutions that neither company could otherwise achieve on its own”, said Eddie Edwards, CommScope CEO. Furthermore, CommScope will benefit from a more diversified product base, while ARRIS will be provided with an exit since fewer customers watch traditional TV from set-top boxes, which represent a major part of the target’s revenues.

Thanks to Economies of Scale through global shared services, CommScope expects to achieve cost synergies in SG&A of roughly $112.5 million, while savings related to procurement and supply chain will save an additional $37.5 million. Hence, total cost synergies will be about $150 million, expected in the third year after the closing.
According to CommScope’s press release, the deal will be accretive for shareholders, who expect a 30% EPS increase in the first full year.

ARRIS shareholders will receive $31.75 a share, a price that implies a premium of about 27% on the volume-weighted closing price from September 23rd to October 23rd.
The deal was partially financed by the Private Equity group Carlyle, which decided to contribute with a $1 billion convertible preferred equity investment in CommScope, yielding 5.5%, with a conversion price of $27.50. If Carlyle converts the investment in common equity, it will own approximately 16% of the buyer’s outstanding shares. The investment firm listed CommScope on the NASDAQ in 2013, after buying-out the company two years earlier in a deal worth roughly $3.9 billion. An additional $6.3 billion was provided in the form of debt by JP Morgan Chase, Bank of America and Deutsche Bank.

Nevertheless, in response to the announcement, CommScope shares dropped more than 18 percent over concerns about the heavy debt burden implied by the deal. However, CommScope CEO reassured investors stating that the company had already dealt with leverage in the past in the context of acquisitions. On the other hand, ARRIS’ share price increased by roughly 23% from November 6th to the day of the announcement, rising from $24.97 to $30.68.

Furthermore, Eddie Edwards will continue to serve as CEO and President and two Carlyle representatives will join CommScope’s Board of Directors.
The deal, which is subject to ARRIS shareholders vote and regulatory approvals, is expected to close in the first half of 2019.