Tensions between North Korea and the US have never been so tense before, especially after that North Korea claimed that CIA and intelligence services of South Korea plotted to kill Kim Jong-un with bio-chemical substances. With the CIA refusing to comment and without any explanation given by South Korea so far, this latest update will certainly increase Pyongyang-Washington contrast and open new and uncertain scenarios. Despite the uncertainty for the future, what we can be sure about is the impact that the current situation has already produced on other Asian economies.
​
In the last months, strengths’ demonstrations from North Korea have increased in both number and intensity: a variety of nuclear tests, missile launches and parades have been held with the aim of proving the solidity and compactness of the regime.
As a response, US position is clear: in many different circumstances, Trump has made statements that undoubtedly demonstrate his intention to face the problem in order to “solve” North Korea and stop it developing nuclear tests. Indeed, he has defined North Korea as “a problem that will be taken care of”.

In order to implement this intention, the pentagon has sent the USS Cark Vinson together with other naval armaments in the area.
Within this game of strength, it is possible to identify how the development of the above (and others) political events impact Asian economies through different channels, some of which are explained below.
Many declarations of the US government have been followed by a strong response on the forex market, with the YEN progressively appreciating its value, especially against the South Korean won.
The period of YEN instability has started on April the 3rd (see below graphic) after Trump’s declaration that the US could act alone against North Korea even without a China’s contribution and cooperation. In fact, the following day, Pyongyang hold a further provocation: the launch of a missile pointed against American bases in Japan.

The below graphic shows the exchange rate JPY/KRW and the beginning of YEN’s instability that will worsen if tensions do not ease. 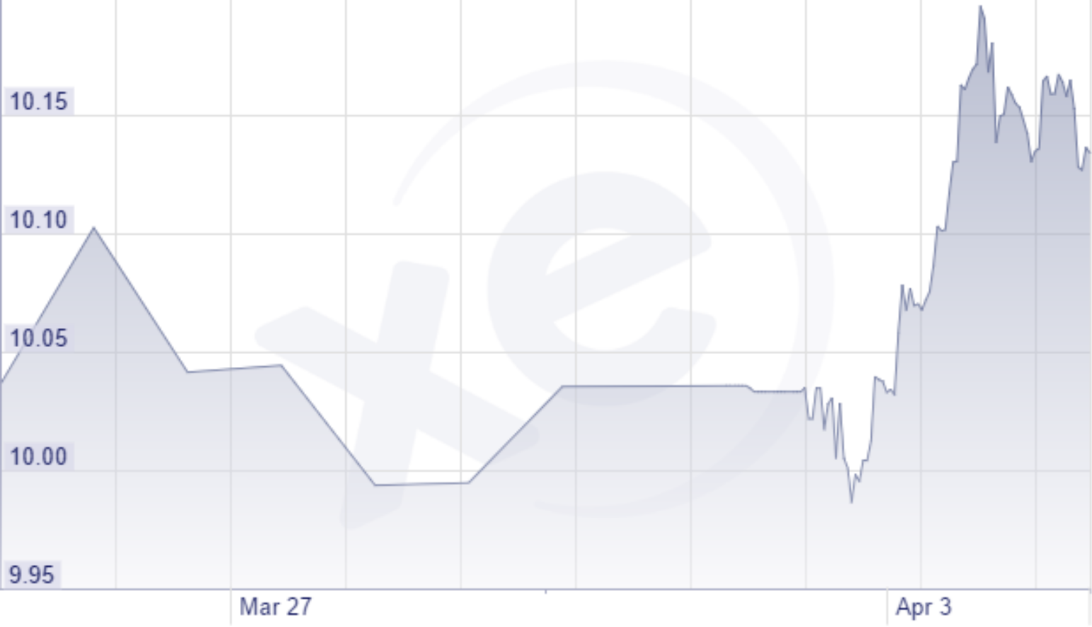 Source: xe.com
One reason of the progressive appreciation of YEN against south Korean won may be identified in a climate of risk aversion due to increasing tensions in the area and strong uncertainty about the future that make people reduce south Korean assets’ demand. A reduction in South Korean currency demand determines a depreciation that results in an increasing value on Japan’s YEN.
Another factor justifying the aversion to risk of South Korean investors (and- as a result- won weakness) consists of an increasing popularity in South Korean presidential pools of those candidates who hope more tense rapports with North Korea and a stronger cooperation with the US.

At the same time, since the Yen is seen as a safe currency, a tense climate increases investments in Japan due to an investors’ need of putting money into safe under these kinds of circumstances.
However, a stronger YEN may not be the best wish for BoJ and Japan monetary policy authorities in general. In fact, as explained in a previous article, a rising YEN would contrast with Japan efforts of achieving higher inflation targets through an export-driven growth due to appreciating exports (national goods more expensive in terms of foreign goods).

Moreover, in order to satisfy the uncovered interest rate parity condition, a rising exchange rate must be associated with higher interest rates which contrast with current Japan’s expansionary monetary policies and attempts of achieving higher inflation targets.
Another strong impact on JPY/KRW exchange rate has happened on April the 23rd when Pyongyang has detained a US citizen (bringing to three the number of Americans now being held in the country).
Once again, it possible to verify a correlation between every event that aggravates geopolitical relationships in the area and fluctuations of JPY/KRW exchange rate.

Last but not least, South Korea is suffering because of economic measures adopted by China in response to its stronger collaboration with US against North Korea.
In fact, even though Beijing-Pyongyang collaboration is becoming more and more hampered, China has great economic interests with North Korea and Chinese trade with North Korea has increased of 37 percent in the first quarter of 2017.

This is probably the reason why, after the installation of a missile defence system by the US in South Korea, Beijing decided to reduce Chinese tourism to South Korea and to block imports of Korean products. The impact of these decision may be particularly tough if we consider that, according to a Credit Suisse research, Chinese tourism in South Korea account for around 0,5 percent of its GDP.
Considering all the effects that this temporary situation has determined, if the bigger geopolitical crisis of 2017 worsen, the Asian economies could take a severe battering with unpredictable consequences.